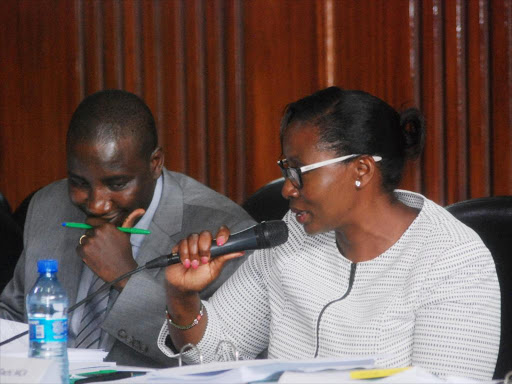 Nairobi Speaker Beatrice Elachi and Clerk Jacob Ngwele during a past meeting at City Hall. /COURTESY

Fights over the tender for the speakers' residence and claims of corruption is fuelling the row between Nairobi Speaker Beatrice Elachi and Clerk Jacob Ngwele, the Star can reveal.

The differences between the two county assembly officers escalated into a near fist fight on Thursday, prompting the orderlies to separate them.

Elachi and Ngwele were led to a private corridor away from the full glare of City Hall journalists after they confronted each other over the issues.

"Why are you destroying my career? Why do you want to ruin my life? why should you try to embarrass me?" Ngwele questioned Elachi.

The clerk is alleging that the speaker has a personal interest in the Sh150 million tender for the acquisition of the speaker's residence.

He alleged that one of the speaker's close relative has been tipped to win the tender.

"Our fights are purely grounded on a failed business scheme. She is now trying to find ways to fight back with the belief that having me out will help her," Ngwele said.

On Saturday, Elachi told the Star she has nothing to hide regarding the residence in question and challenged Ngwele to launch investigations over the claims.

"The process of tendering for the speaker’s residence was made public and I am not afraid of being investigated on this," the speaker said.

"Let him involve even the DCI. He can as well take the media to the residence to see for themselves."

The plan for acquiring a speaker's residence was mooted in December last year in line with regulations set by the Salary and Remuneration Commission (SRC).

SRC at that time directed all 47 counties to stop paying rent for the speakers and instead build or acquire houses for them.

The speaker wrote to the DCI on grounds she discovered many cases of financial malpractice, including illegal procurement that was done by the Office of the Clerk.