Uhuru order: All tender company directors must be made public 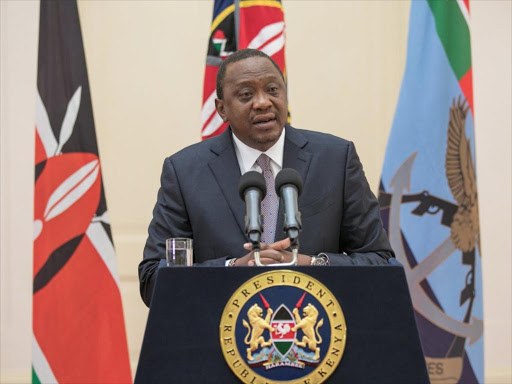 President Uhuru Kenyatta has ordered all government entities to publish names of firms and identities of directors of companies that are awarded any supply contracts.

In a major blow to the secrecy that surrounds tenders, and the astronomical cost of supplies to government institutions, the Executive Order requires full procurement details to be published from July 1.

The information to be published includes items or services purchased, contract prices and the particulars of the suppliers including owners, directors and beneficial ownership.

Many corrupt deals are carried out by shadowy companies whose ownership is often known but not documented.

Beneficial ownership has dogged the pursuit of justice in corruption cases and many of the latter day millionaires who flaunt their stuff are not known to be directors of any companies.

The order means that procuring entities will from next month tailor their tender documents to include names of the directors of bidding companies. The directive spells doom for politicians and influential wheeler-dealers who either directly or through proxies obtain lucrative government and parastatal tenders.

“The publication will allow members of the public to access the information,” said State House Spokesperson Manoah Esipisu in a statement.

The new measures are designed to ensure integrity, prudent use of financial resources, and fair, equitable, competitive and cost effective procurement, according to the order.

“This will enhance the highest level of public scrutiny at all units of public administration, and thereby improve the management of public resources for public good,” added the statement.

Already, heads of procurement and accounting officers in all government agencies and departments as well as state parastatals have been sent on a 30-day compulsory leave to pave way for their fresh vetting.

By the Friday deadline last week, some 400 affected government employees had submitted their M-Pesa and bank accounts statements, names of their spouses, close relatives and business associates ahead of their examination.

The polygraph-driven vetting is expected to identify individuals who have enriched themselves beyond their genuine earnings in the government crackdown on graft.

The State is head-hunting an independent firm to administer the lie detectors on affected officers to nab those who have amassed illegal wealth. At the same time Uhuru ordered that all public procurement will be undertaken through the electronic platform of the Integrated Financial Management Information System (IFMIS) starting January 2019.

Uhuru also reiterated that chief executives of state-owned firms are personally responsible for all procurement and public resources in their institutions.

“As outlined in their respective Letters of Appointment, Accounting Officers shall take personal responsibility for all procurement in their agencies, and will be held personally accountable for all public resources under their charge,” read the statement.

The President has also directed Treasury Cabinet Secretary Henry Rotich to ensure that the IFMs system is upgraded to guarantee secure and seamless integration of all public procuring entities from January 2019.

However, the IFMIS system has often been blamed for inefficiencies in processing payments with county government blaming it for delays in implementation of development projects.

Governors have previously called on the government to address technical inefficiencies experienced in the IFIMS system to ensure faster processing of payments including accessing their equitable share.

Last month the Council of Governors cited poor connectivity in using IFMIS when carrying out transactions as a contributor to huge pending bills.

“Problems associated with the IFMIS and e-procurement systems have contributed to huge pending bills in counties and we hope they will be addressed for us to continue discharging our duties well,” Kakamega Governor Wycliffe Oparanya said.