US goes after Kiir, Machar's wealth in Kenya, threatens sanctions 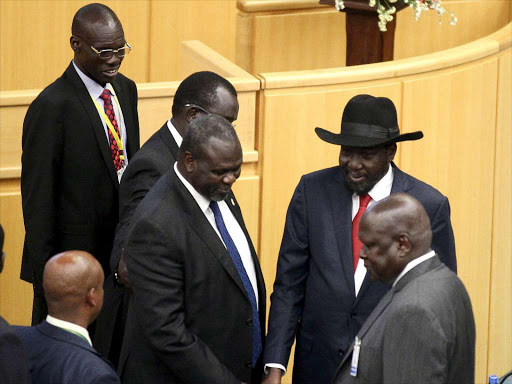 The United States has threatened sanctions and funding cuts for the Kenyan government if it fails to investigate President Salva Kiir and former Vice President Riek Machar.

Sigal Mandalker, who is US Secretary for terrorism and financial intelligence, claimed that the leaders are using the country, and Uganda, as a safe haven for their property acquired through proceeds of conflict in South Sudan.

The US government further wants Kenya to impose sanctions on corrupt South Sudanese individuals by barring them from banking their money in Kenya.

The Donald Trump's administration said this will go a long way in ensuring peace and stability in South Sudan.

Through its Treasury Department, the US government says it is concerned, "having discovered that corrupt South Sudanese officials are using Kenya and Ugandan banks to hide illicit money".

"Those who profit from human rights violation in corruption, preying on the poor and innocent, on mothers and children must heed our warning," Sigal said.

"We will impose consequences, we will cut off your access to the US financial system and we will work with our partners in this region and other regions to do the same."

Sigal said the monies have been used to acquire assets with the perpetrators using the 'safe haven' provided by the countries to gain access to international financial systems.

She alleged that the perpetrators of war in South Sudan have been investing in real estate to cleanse the money they loot from the clash-torn country.

President Kiir and Machar are among those mentioned in a report by an NGO - the Sentry, which has specifically pointed that those targeted with the sanctions own real estate properties in Lavington, Nairobi.

Sigal, who visited Kenya on Tuesday, warned banks and the government of possible consequences if they will not take action on institutions that support money laundering.

She warned that the banks' reluctance to harden their financial institutions could hurt the Kenyan credibility of the banking sector in the international community.

The Sentry co-founder John Prendergast also noted that the lack of measures could see the country harbouring funds from other criminal activities such as terrorism.

"Today, we are talking about war criminals' money that is coming in from South Sudan. Tomorrow, it could be terrorist money," John said.

"The US and Kenya can work closely on the shared agenda to ensure South Sudan war criminals, state leaders and tomorrow’s terrorist who are pumping their money to the Kenyan financial institutions."

The allegations came at a time some banks are being investigated for negligence after huge sums of unaccounted money from corruption suspect is said to have been banked in the institutions.