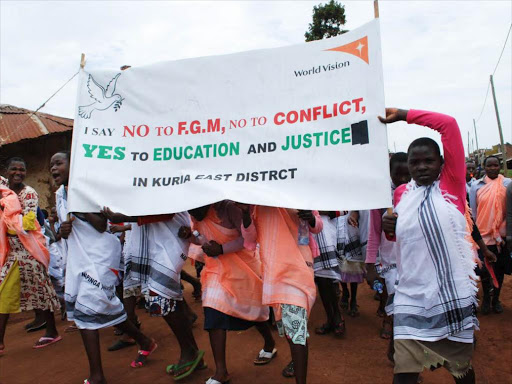 Girls at the marching at prayer function as they sung against FGM in denouncing the exercise. Photo Angwenyi Gichana

Kajiado West Sub County has been arrested for allegedly ejecting her 11-year-old daughter from school and forcing her to marry an old man in Narok.

Police said the Mosiro resident also forced the girl to undergo female genital mutilation, which is illegal, as part of preparations.

launched a search for the class two pupil who could not be found.

Stanley Rotich, who is the children's officer in charge of

Kajiado North and Kajiado West Sub-counties, said the woman was apprehended on Friday evening with the help of the area chief.

She will be taken to court on Monday.

Rotich said the large sizes of the two counties and their

“Maasai, Mosiro and Esonorua clans in Kajiado West are adamant about abandoning the cultures of the cut and early marriage,” Rotich noted.

“The girls in these regions are very insecure in the hands of their own parents and caregivers since they are forced into early marriage after secretly being cut."

They will be fired if they do not report incidents, the Commissioner warned, adding that

all chiefs must be aware of events in their areas.

“We must endeavour to protect our girls by ensuring their rights are protected at all costs,” said the administrator. “Those thinking girls are used in barter trade for cows and goats will face the full force of the law."

Kajiado West Deputy County Commissioner William Kakimoni directed teachers to protect girls in schools and be the first to raise the alarm when their parents behave suspiciously.

“Absenteeism should be a worrying trend in Kajiado West in the fight against FGM and early marriage,” Kakimoni said on Madaraka Day.