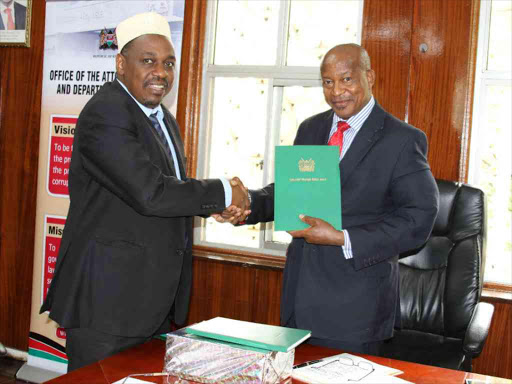 Professor Hamadi Boga handed Wakf Bill, 2018 and Taskforce on the Review of the Wakf Commissioners Act, 1951 to Attorney General Kihara Kariuki at his office, June 7, 2018. /COURTESY

A bill to replace the pre-independence Wakf Commissioners Act of 1951 has been submitted to the Attorney General.

It is part of far reaching recommendations to harmonise the management and utilisation of Wakf properties in Kenya in line with Islamic law.

The bill proposes that the acknowledgement of Waqf endowments as significant contributors to national wealth. Guided by Islamic law, it also seeks to ensure that Waqf assets and infrastructure benefit designated individuals and groups.

The bill is cognizant of the fact that the Waqf sector is modernising fast and needs to keep abreast and adapt innovations in finance, information and communications technology.

Professor Hamadi Boga handed Wakf Bill, 2018 and Taskforce on the Review of the Wakf Commissioners Act, 1951 to Attorney General Kihara Kariuki on Thursday. He did so on

behalf of the Wakf Commissioners of Kenya (WCK).

The 10-member task force was appointed in October 2015 to review the Act was make recommendations based on international best practices.

Kariuki observed that the 1951 Act is an old law that is neither in tandem with Islamic laws nor aligned to the Constitution.

“The Act was informed by policies of the colonial era and has no place in Kenya today," he noted.

"Similarly, the structure and organisation of the WCK do not meet the expectations of the Muslim community. It is equally important that interests of persons practicing the Islamic faith are taken care of in line with our Constitution."

Wakf, according to islamic law and Section 2 of the Wakf Commissioners Act is a religious and charitable endowment or dedication of any property in accordance with islamic law.

It is regarded as a final gift to charity that a donor (wakif) can no longer claim. It is irrevocable and must be perpetual.

According to islamic law and the Wakf Act, a Waqf can be for any purpose not repugnant to Shariah. Family Waqfs (Waqf Ahly) are traditionally focused on protecting future generations from destitution and homelessness, while public Waqfs (Waqf Kheir) are dedicated to the public well being managed by financing educational, public health, orphanages and related facilities, as well as their maintenance.

The Wakf bill also proposes that unclaimed assets held by the Public Trustee or Unclaimed Assets Authority, that belong to Muslims, should be transferred to the Waqf Commission.

Factors that led to the diminished role of the Wakf include use of outdated management approaches inherited from the colonial government and dating back to the early 20th century.

Inadequate recordkeeping made it difficult for donor families and potential givers to track income and expenditure for property, leading tofailure to gain the support of professionals, business people and leaders of goodwill who could have helped to move the institution forward.

Other factors included increased misuse and abuse of Waqf properties by tenants, who sublet the properties at much higher rent without the landlord’s approval, thereby eroding the commission’s revenues by cutting capacity to enforce new lease conditions.

This resulted in resentment and little faith among the public in terms of the level of support accorded.

The realisation that alternative legitimate ways of creating endowments, such as through trust legislation, contributed to the further decline of Wakf Commission, with the judicial system being accused of being unsympathetic to the Waqf cause.

The overall effect meant that donors were no longer creating new Wakfs and were resorting to the Trust Act managed by the Administrator General’s Office at the Office of the Attorney General.

Post a comment
WATCH: The latest videos from the Star
by STAR REPORTER @TheStarKenya
News
07 June 2018 - 18:00
Read The E-Paper