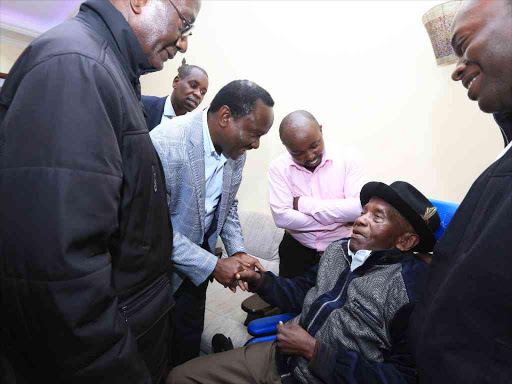 at his retirement home

They arrived at 9 am and spent close to two hours

with the clergyman who is now close to 90 years old.

The team prayed for Ndingi,

presented him with gifts and had tea with him.

Ndingi cannot sustain long conversations but he occasionally smiled at the visitors, the caregivers saying this showed he was happy that they visited.

He thanked the Nasa principal in his short statement.

Kalonzo said: “It was great. We feel blessed that we got the chance to spend time with His Eminence the Archbishop. He was a crusader of justice in this country.

"I am so grateful, particularly that the Catholic Church is taking this great care of the Archbishop in his retirement. He looks amazingly happy and healthy. This is great."

The Wiper leader also visited Retired Archbishop John Njenga who is also in the home, prayed and presented gifts.