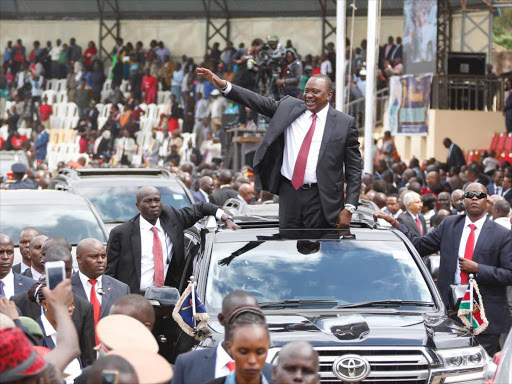 Kenya's ambitious food security plan, part of Jubilees Big Four agenda, could be a mirage if plunder of irrigation projects is anything to go by.

In his 2015-2016 report, Auditor General Edward Ouko flagged Sh20 billion expenditure allocated to the National Irrigation Board for schemes that cannot be accounted for.

Established in 1966, the board is mandated to develop, control and improve irrigation. It manages the Mwea, Perkerra, Tana, Ahero, West Kano, Bunyala and Bura irrigation schemes. It also runs the Mwea Rice Mills and Western Kenya Rice Mills.

The NIB also implements the Galana-Kulalu Food Security Project in Tana River and Kilifi counties. The project aims to irrigate one million acres within five years.

The Jubilee administration wants to produce 2.76 million bags of maize by the end of this year alone.

At the centre of Ouko's probe is the giant Sh7.3 billion Galana-Kulalu irrigation scheme launched by President Uhuru Kenyatta in January 2014.

The 10,000-acre project was to produce 20 million bags of maize but the report says only 103,000 bags have been produced since commissioning.

The NIB leased 20,000 acres for five years but only 10,000 acres have been used. The board failed to explain why it leased twice as many acres as required.

The audit questions why the NIB leased land from the Agricultural Development Corporation at an inflated cost of Sh3,000 per acre per month, while a private developer paid ADC Sh200-300 per acre for the same land.

This means NIB would spend Sh3.6 billion for the five-year lease, a deal that could cost taxpayers Sh360 million.

“In the circumstance, it has not been possible to confirm Sh150m, being lease charges payable by the Board for the five years for the idle land, is a proper charge to public funds," the audit said.

The project is financed by a Sh7 billion loan from the Bank Leumi of Israel.

The auditor says the loan terms are unfavourable since interest will be reviewed from time to time, depending on economic conditions.

The report also raises concerns that 21 irrigation projects initiated in 2012 for Sh880 million have stalled — now NIB wants an extra Sh15 billion to complete them.

“It was not possible to confirm whether they will be completed in the near future and the additional cost(s), if any, required to complete them or losses the Board may suffer if projects are not completed,” the auditor said.

This year the Jubilee administration allocated Sh10.3 billion to the NIB.

“It has not been possible to ascertain that the total expenditure of Sh3,603, 941,641 is a proper charge on public funds,” the auditor said.

According to the audit, the board members' expenses shot up by 740 per cent from Sh3.4 million to Sh25 million in one year.

Other questionable projects include the mega Sh20 billion Thiba dam, launched by Uhuru on November 23, 2017, in Kirinyaga county to double the current 80,000 tonnes rice production to 160,000 tonnes annually.

On this project, the board failed to account for Sh375 million compensation to landowners for dam construction. It cannot provide details on persons compensated, rates of compensation and acreage acquired.

According to the report, Sh68 million — which the board claimed to have used in constructing buildings — might also be missing, as this could not be verified. The fixed assets register does not contain a list of the board's buildings to justify any construction expenditure.

Dido and Sons Limited was paid Sh109 million before completing the Oldonyiro Irrigation Scheme Development in Isiolo county. No feasibility study was done. The project had a price variation of Sh15 million, contrary to procurement law.

The same contractor was allowed to build Oldonyiro Irrigation Scheme Development-Phase 2 for Sh224 million in 2015.

“Payment of Sh40 million was not supported with any certificate of work done. The project is yet to be completed,” the auditor said.

“The propriety of expenditure of Sh224 million paid and-or to be incurred could not be confirmed.”

A company described as having a bad record was paid Sh7 billion to construct Bura Irrigation Project Phase 1 before it was completed. There was no feasibility study or completion date.

“In view of the long delay, completion project remains doubtful,” the auditor said.

The board failed to explain why they paid an extra Sh10 million for the Great Bura Irrigation project feasibility study, despite agreeing on Sh167 million.

“The project was added a provisional Sh19 million to finance stakeholders’ consultative meetings and tasks critical to the assignment, contrary to law," the audit said.

“The project faced challenges during implementation such as construction during the rainy season leading to stoppages and destruction of work done; and failure to include targeted beneficiaries in the planning stage,” the report said.

The project is not complete and may not benefit the intended group as they were not involved in planning from the start.

The contractor was paid Sh38 million not supported by a certificate of work done.

Mwanja General Contractors Limited refused to complete the Runga Rehabilitation Works Irrigation Project for nonpayment of Sh18 million. The project was not in the approved annual plan as required by procurement law.

“Further, no feasibility study was done ...As at 30 June 2016 (six months after expected completion), the project was 70 per cent complete and the contractor had stopped work due to the failure of the Board to pay for work done,” the auditor said.

It was not clear when the project will be completed and if additional costs will be incurred,.

Another company was paid Sh70 million before it completed the Mukengesya Irrigation Scheme water pan.

The board's debts attract high penalties and fines, which it has not factored into chaotic accounting books. They include KRA (Sh623 million), contractors (Sh2 billion despite stalled projects) and staff gratuity.

The NIB also failed to explain Sh23 million in the debtors' balance.

The accuracy and recoverability of Sh228,483,441 debts could not be ascertained.

Post a comment
WATCH: The latest videos from the Star
by IMENDE BENJAMIN @TheOkinda
News
02 June 2018 - 09:00
Read The E-Paper