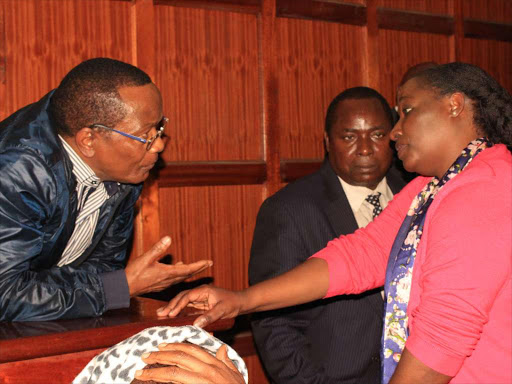 Principal Secretary in the Ministry of Public service ,youth and gender affairs Lilian Mbogo Omollo talks to Director General NYS Richard Ndubai at a Milimani court room on Tuesday,May 29 where together with other individuals they were charged with corruption at the NYS. PHOTO/COLLINS KWEYU

It took President Uhuru Kenyatta’s personal initiative to fast-track the arrest and prosecution of the suspects of the NYS scandal, the Star can report.

in the misappropriation of Sh468 million.

Uhuru has been receiving regular briefs on the progress of the investigations from the DCI through Public Service head Joseph Kinyua.

But on Sunday afternoon, Uhuru reportedly telephoned DCI George Kinoti and pointedly told him that he would not go to bed until all suspects were arrested and locked up, highly placed sources told the Star yesterday.

The demand caught the police chiefs by surprise. They had to revise their initial plan of nabbing the suspects on Monday.

Kinoti and Director of Prosecutions Noordin Haji had met on Friday for a second time at the DCI headquarters to analyse the evidence collected by investigators, with a view to drawing up the charges for prosecution.

They had agreed to arrest the suspects starting Monday but things took a dramatic turn after the President’s call.

Kinoti then summoned senior police commanders for an urgent meeting at his office on Kiambu Road at around 5pm, with the sole agenda being the arrest of suspects.

Well-placed sources said Kinoti directed that all the 42 suspects whose details he provided be arrested and locked up. Kamwende was appointed to lead the operation with strict instructions that none of the suspects be left free.

With the President breathing down his neck, the DCI and police swung into action. By 1am nearly half of the suspects were in police custody.

The operation was concluded by 3am when all suspects had been arrested and the officers retired to bed.

On Monday, hours after the arrest of the suspects, Uhuru issued a fresh warning to those involved in corruption in government.

He is expected to speak on the fight against corruption in his Madaraka Day address in Meru on June 1.