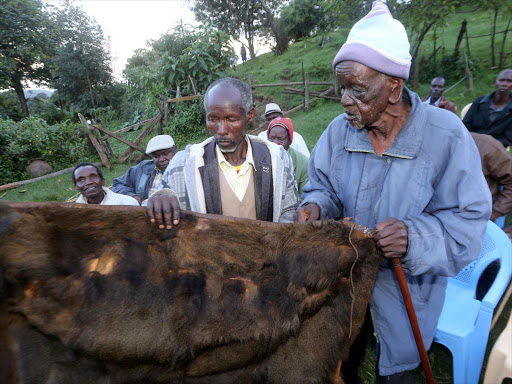 The installation of DP William Ruto as a Tugen elder, Lembus subclan, has been revoked and the black monkey skin used in the ceremony returned to its owner.

Kimitei Kiplagat, 93, from Eldama-Ravine subcounty got back his ceremonial shawl or Sambut on Saturday evening.

He said he had given his Sambut to a friend to perform a dance last December, but he did not return it. Kiplagat said the garment “is not meant to pamper politicians”.

Tugen elder Joseph Noti yesterday told the Star, “In Tugen culture, it is taboo to return a garment or any other item after crowning someone. It automatically means the entire process has been revoked or rendered invalid.”

Noti has said Ruto can return for another coronation in Baringo after all Tugen, Pokot and Ilchamus elders consult and agree.

Tugen elders have dismissed the installation of Ruto, saying they were not consulted. Tugen’s Miot Council of Elders secretary, the Rev Zachariah Chirchir, said the crowning of Ruto was a “disgraceful fiasco”.

“I haven’t heard of this. If true, we are so sorry for embarrassment caused to the DP,” he said.

Chirchir urged the Lembus Council of Elders, who conducted the installation ceremony, to urgently apologise to Ruto.

In a media video posted yesterday on social media, Lembus elders dismissed claims the monkey skin returned to Kiplagat is the one used to instal Ruto as elder.

But elder Jonah Taalam, who had borrowed the Sambut from Kiplagat, confirmed the returned skin is the same one he borrowed.

He has apologised to the Lembus elders for allowing the skin to be used without the owner’s consent.