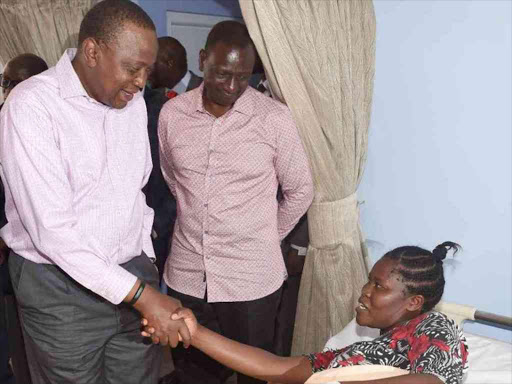 President Uhuru Kenyatta and his deputy William Ruto visit a patient in hospital./FILE

President Uhuru Kenyatta is tightening the noose around corruption cartels in a multi-pronged strategy that entails daily briefing on the progress of investigations.

Beyond the public warnings he has made at different public fora, the President has issued firm instructions behind the scenes that anyone dabbling in corruption be dealt with firmly.

He has also brought supervision of the agencies charged with the investigation and prosecution closer to his office.

As part of the charge against the vice, the President has systematically been dismantling and replacing the heads of the offices charged with law enforcement — the Director of Public Prosecutions, the Director of Criminal Investigations, the Attorney General — all of which now have new faces.

Uhuru has insisted that investigations be expedited while ensuring that tangible evidence is collected to ensure that those culpable are successfully prosecuted.

The briefs are being channelled

through Head of Public Service

Kinyua, as Uhuru seeks to eliminate the biggest threat to his legacy that has also caused a public uproar over graft.

Among those being keenly followed by the presidency are the investigations into graft at Kenya Power, the National Youth Service and the National Cereals and Produce Board, which started more than a month ago.

Richard Ndubai to step aside.

Staff in the procurement, finance and accounting offices were also sent on compulsory leave pending the conclusion of the investigations.

State House confirmed that Kinyua was receiving briefs on the investigations but later in the evening claimed that the letter was fake.

It is understood that State House does not want to be seen to be interfering with the investigations, hence, the President's silence despite overwhelming public outrage.

“No, it's best left to DCI and investigative agencies,” was Chief of Staff Nzioka Waita’s response when the Star sought an update on the investigations.

However, the Star has learnt that the President would address the country on his administration's action, once he is satisfied that the investigations have made headway.

Despite State House disowning a

George Kinoti to provide him

with daily briefings, copied to Director

“As I made you aware, His Excellency the President is keen on speedy investigations and swift legal action against anyone found culpable," Kinyua wrote.

He added, “I cannot emphasise enough the need for thorough investigations in these cases. Investigate and question anyone involved, irrespective of rank or level.”

“The President pledges his full support and has directed that you be granted all necessary cooperation by all relevant agencies,” Kinyua said in the letter.

Deputy President William Ruto confirmed that there was a directive to various institutions to deal with the investigations expeditiously.

"Relevant agencies are directed to apply their mandate and spare no effort to investigate and prosecute individuals who have misappropriated public funds, and if found culpable, the courts should dispense swift justice,” Ruto said.

The DP said that the government was committed to ensuring that all public officers shoulder the responsibility of their offices by being good stewards of resources and ensuring value for money.

“Those identified to have participated in the loss of billions of shillings in these scandals should be punished. No one should be spared.

Stiff penalties must be meted out to stop such acts. We cannot be losing money to corrupt individuals at the expense of the development of the country," Ruto said.

Since the beginning of his second term in November,

Uhuru has spoken out strongly against corruption, saying it has the potential to both undermine his Big Four agenda and completely destroy the country.

On May 10 during the

8th Presidential Round Table at State House with private sector representatives, Uhuru said, “We must address the real elephant in the room. We must say enough is enough for the country to move forward.” He repeated the same message at a follow-up meeting with the same group on May 18, reiterating that he would deal with real or perceived corruption ruthlessly.

Ruto reiterated Uhuru's commitment to the fight against graft, saying that those found culpable will be prosecuted.

In a related development, the DPP successfully convinced the High Court to dismiss applications for anticipatory bail by two individuals being investigated over the NYS scandal.

all those found culpable will face the full wrath of the law,” Haji said.

Uhuru deftly removed the previous heads of the investigations and prosecution arms who were seen as lax and ineffective. He has entrusted the new-look anti-graft team — Haji, Kinoti, Solicitor General Ken Ogeto and Attorney General Paul Kihara — with the mission of changing the profile of his tenure.

They are working closely with the National Intelligence Service, hitherto confined to collecting mainly political and security intelligence.

Sources say the next flank of the strategy for encircling corruption cartels will target changes at the Ethics and Anti-Corruption Commission and the Police Service, whose heads are set to leave in the next six months.