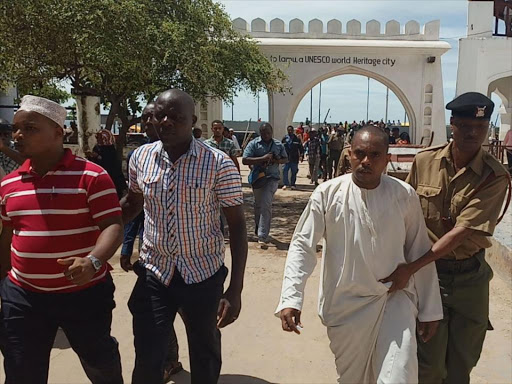 Police arrest an activist during a protests against the establishment of the a coal-fired power plant in Lamu on Friday, May 25, 2018. /PRAXIDES CHETI

Two activists were arrested as they led anti-coal protests in Lamu town on Friday.

Police said the members of the Save Lamu activist group were conducting an illegal assembly.

Walid Ahmed and Is’haq Abubakar Khatib were detained at the Lamu West police station after their arrest.

Subsequently, the demonstrations ended prematurely with police warning those who defy the order of dire consequences.

The police said all those involved in the protests will be sought after and arrested.

Lamu West OCPD Juma Londo said: "They had sought permission for the demonstrations which we denied them but they still went ahead."

Locals and other activists in Lamu have condemned the arrests terming the move as demeaning.

Lamu Marine Forum chairperson Mohamed Athman, who is also a member of Save Lamu, said he was shocked by the manner in which police manhandled the activists and "protesters who were practising their democratic right".

"We don’t need coal project in Lamu. The government can’t force such a project down our throats."

"They are now using police to instill fear and intimidation. We shall not tire in our quest to stop the coal plant from being set up here," Athman said.

Save Lamu activists have vowed to continue opposing the Sh200 billion venture set to be set up at Kwasasi village in Hindi, Lamu West.

The project is being undertaken by the Amu Power Company, a consortium of Gulf Energy and Centum Investment.

So far, a total of 975 acres of land has already been set aside for the establishment of the 1,050 MW power project.

The project has already been approved by the National Environmental Management Authority (NEMA).