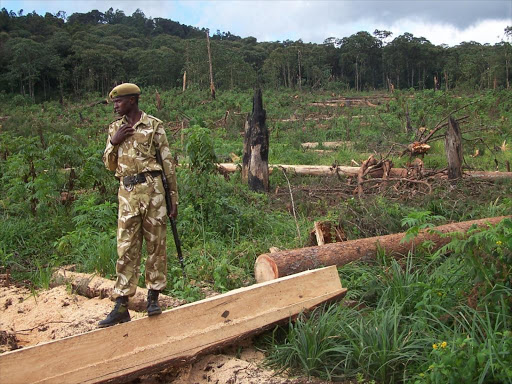 "Experts at the forum said Africa loses an estimated 2.8 million hectares of forests due to deforestation and land degradation."

The government has extended the ban on logging in public forests for six more months, Environment CS Keriako Tobiko said on Wednesday.

He said this is in a bid to allow the appointment of the new board of Kenya Forest Service and implementation of the interim reforms.

The ban on logging and extraction of timber from Kenya's forests was imposed on February 24 and was due to lapse on May 24.

But in a statement, Tobiko said: "The extension will also allow the ministry to streamline KFS operations and management of the forestry sector."

Changes in the forestry enforcement agency started with the suspension of director Emilio Mugo on March 12.

Mugo was suspended over the uncontrolled destruction of forests, which a task force formed to study the cause blamed on ineptitude on the part of KFS.

The task force headed by the Green Belt Movement chairperson Marion Wakanyi noted that KFS is marred by corruption and incompetence.

"These have made it impossible for KFS to tame the destruction of the environment," Wakanyi said.

She spoke during a brief to the Deputy President William Ruto at his Karen office in Nairobi last month.

Post a comment
WATCH: The latest videos from the Star
by By LILLIAN MUTAVI @LillianMutavi
News
23 May 2018 - 12:00
Read The E-Paper