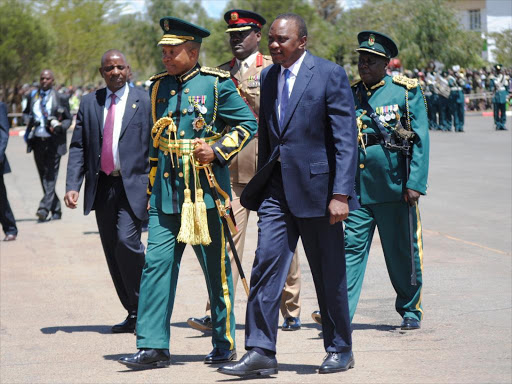 The Star has established that the banking regulator is tightening the noose on banks that transacted money looted from the National Youth Service without following the strict prudential guidelines.

It emerged that some of the banks targeted in wide-ranging investigations allowed their clients to withdraw bulk cash, without justification as required under the CBK rules.

Some of the companies under probe are said to have opened accounts a few hours before the NYS money was credited, signalling complicity, complacency or negligence that aided fraud.

While withdrawing cash over the counter is not illegal, the industry regulator has stringent guidelines on such transactions when the amount involved exceeds Sh1 million.

The regulations on more than a million withdrawal were issued in 2016 to stem money laundering. It was issued following brazen theft of billions of shillings from NYS, in the initial scam in which taxpayers lost over Sh1.6 billion.

“This new guideline aims to reduce the risk inherent with cash transactions, such as losses due to fraud and theft. We encourage you to consider use of electronic payments, which are an alternative and secure channel,” CBK said in the statement dated February 16, 2016.

Under the regulations, a customer is required to fill a mandatory cash withdrawal form stating where the money is being taken and the use.

Among the questions that must be answered include: why the large cash deposit or withdrawal is necessary, why it cannot be done through electronic means, the source of the funds as well as the full identity of the intended beneficiaries.

The regulations, which were designed to curb money laundering in the country, also require a client to disclose where the money will be taken immediately after leaving the bank premises.

However, it could appear that the six banks cited in relation with the movement of the NYS cash deliberately failed to ensure their clients adhered to the rules, raising suspicions that the could have been conduits in the mega scam.

Yesterday the Star established that CBK had swung into action and was already inspecting more than 50 suspicious transactions through the six banks, with a view to nailing culprits for prosecution.

A source at the CBK said it is in the process of examining the movement of money from the NYS coffers into the accounts of various firms associated with the architects of the scam.

CBK is also examining if the concerned banks flagged the suspicious transactions and, if not, why they failed to report to the Financial Reporting Centre as required under anti-money laundering laws.

After targetted inspections of some banks suspected to have violated prudential guidelines, the CBK will enforce sanctions against them.

Last July CBK enhanced penalties for banks, mortgage companies and credit reference bureaus to a maximum of Sh20 million for every violation arising out of non-compliance with the Banking Act and Prudential Guidelines.

The regulations were meant to bring into force the Finance Act of 2016 that increased the fines for violation of the laws from the previous Sh5 million.

As the CBK stepped up their probe into the NYS scam, the National Assembly’s Public Accounts Committee said it would summon the banks involved in the massive transaction of NYS proceeds.

At the height of the first NYS scandal, CBK admitted it had fined three commercial banks Sh1 million each for allowing the withdrawal of huge sums of money over the counter by a business person linked to the fraud.

CBK also forced the sacking of nine top managers at Family Bank, where the bulk of the money stolen from the National Youth Service was paid to Josephine Kabura, the businesswoman at the centre of that scandal.

Four other managers at Sidian Bank (formerly K-Rep), underwent a 'fit and proper test', while Faulu Microfinance managers involved in the NYS transactions were also vetted.

Then, Parliament summoned 22 banks adversely mentioned in the scam after key suspects, among them Kabura, admitted to having carted away in sacks millions from the banks.

Yesterday PAC chairman Opiyo Wandayi said the watchdog was properly seized of the matter and had began probing the misuse of public funds at NYS.

"This is a complex matter. We have already started with principal actors. We shall then move to beneficiaries, Treasury and those people in charge of IFIMIS (Integrated Financial Management Information System), as well as the banks that transacted proceeds,” Ugunja MP said.

He said the fraud was well-planned and executed by senior officials at the NYS, the ministry and the Treasury in an intricate web that included bank managers.

The Directorate of Criminal Investigations is already probing the scam and about 40 suspects, among them directors of the beneficiary companies, are lined up for interrogation.

Sources said at least 18 people representing traders and government officials have already been questioned by a multi-agency team over the scandal.

Detectives are scrutinising documents from all NYS departments in Nairobi and other parts of the country to establish whether the law was followed in the award of tenders and if goods and services against which payments were made were actually supplied.

On Monday evening, suspended NYS director general Richard Ndubai and PS Lilian Mbogo Omollo were questioned. They are are said to have denied claims that Sh9 billion had been irregularly paid to phony companies and traders.

Omollo told investigators that the report credited to the National Intelligence Service alleging that Sh8 billion had been lost was incorrect. She said only Sh900 million expenditure required scrutiny.

Omollo said the total amount against the 13 vouchers paid by the agency was Sh121 million.

She said Sh8.8 billion was paid out to suppliers in the two financial years in two batches of Sh6.2 billion and Sh2.67 billion.

Ndubai also recorded a statement and presented volumes of documents to support payments dating back to 2011.

During the same period under scrutiny FY2016-17, NYS rejected claims of 139 suppliers amounting to Sh3.67 billion.

Another 98 suppliers had their requests for payment rejected, while another 179 claims amounting to Sh1 billion are yet to be honored, Ndubai told police.

Their explanation seems to match their earlier position when they appeared before a parliamentary committee investigating the same matter.

NYS staff were required to submit copies of payment vouchers, delivery notes and all documents relating to procurement

Suppliers were required to present documents on payment and proof they supplied goods or services for which they received payments.

Among those who appeared before investigators yesterday were NYS head of supply chain Stephen Mwendwa and his deputy, Eliud Koome.

Shocking revelations of the NYS theft show that suspects rushed to withdraw money in cash immediately their accounts were credited in a mega scam. Senior bank managers are suspected of complicity by deliberately flouting prudential guidelines.

Some banks allowed their clients to withdraw bulk money exceeding Sh1 million which requires customers to provide particulars of the transaction.

The payment process would be initiated from the NYS head office, then the Ministry of Youth headquarters would okay it before Treasury would allow the money to leave government coffers right to banks where it would be withdrawn within hours of hitting designated accounts.

Post a comment
WATCH: The latest videos from the Star
by JAMES MBAKA and KAMORE MAINA
News
23 May 2018 - 08:00
Read The E-Paper