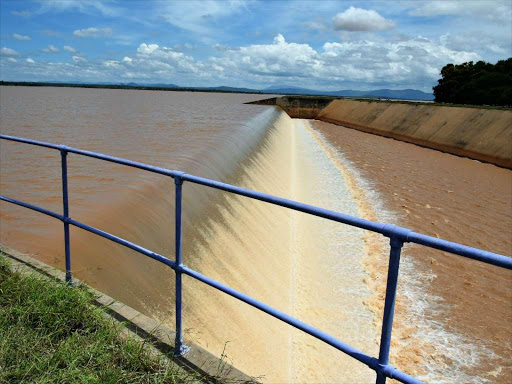 A view of Masinga Dam in this undated photo. /FILE

Masinga Dam is in the Seven Forks cascade.

KenGen announced this in a statement on Saturday, adding the dam is overflowing at a volume of 136.8 cubic meters per second.

It is estimated that the water will reach low lying areas in three of four days, Managing Director and CEO Rebecca Miano said.

“We are glad that most residents heeded an earlier warning by authorities and moved to safer grounds to avoid possible disasters,” she said.

She added that overflow at Kiambere Dam, the last station in the cascade, had subsided to 115.9 cubic meters per second by 6am today, from 206.9

Panic gripped residents of Garissa and Mororo in Tana River after Energy CS Charles Keter announced that Masinga would overflow.

At a press briefing on Tuesday, Keter urged residents of Garissa, Hola, Garsen and Bura to move to higher ground.

Masinga Dam, one of the largest in the country, feeds four downstream dams that are already full.

According to Keter, once Kiambere Dam overflows, it will probably take four days for the water to reach Garissa town and soon after the lower Tana Delta.

Miano said, however, that latest reports show the water level in areas downstream of the cascade was 5.1 meters above sea level by 8am.

This was against the flooding trigger alarm of 4.0 meters given earlier.

"KenGen continues to monitor river flows and dam levels in line with prudent water management at the dams. We will continue to work closely with all stakeholders to provide prompt information on water inflows and levels to facilitate proper management of situations," she said.

She added that the government

should be commended for taking the lead in ensuring the safety of communities around the dam.

Authorities have been on high alert since May 9, when Solai Dam in Nakuru county burst and swept about 50 people to their deaths.

Government engineers are inspecting other dams to see if they are structurally sound and if they were built legally.

Post a comment
WATCH: The latest videos from the Star
by By PATRICK VIDIJA @vidijapatrick
News
19 May 2018 - 09:00
Read The E-Paper