Beekeeping harvests not as sweet as we hoped, Kenyan farmers say 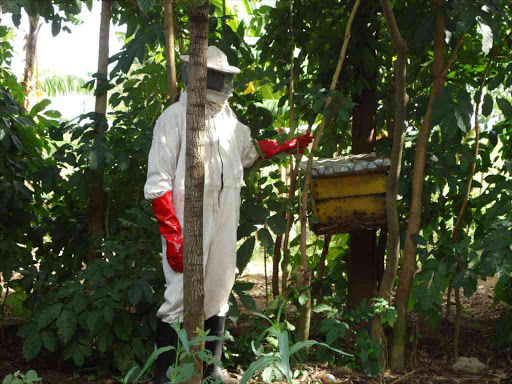 A file photo of a beekeeper who is a member of Etekwa self-help in western Kenya.

In the middle of a 7-acre woodlot of indigenous trees in Chemare, a village in

Rift Valley, Charles Ng’ong’oni keeps 164 hollow-log beehives, which in good years bring him a healthy income by producing thousands of litres of honey.

Ng’ong’oni, 63, has managed the hives since the 1970s. But these days he is being joined by a growing number of farmers in East Africa – and around the world – who are taking up beekeeping as a way of broadening their income in the face of wilder weather, including heat, droughts and floods that can decimate crops.

Kenyan experts now say, is not proving as climate hardy as farmers had hoped.

Last year, amid widespread drought, Ng'ong'oni had almost nothing to sell after harvesting just 25 liters of honey, down from his usual average of 3,280 liters.

Ninety-six percent of his beehives had no honey at all, he said, with the bees unable to find enough nectar from his parched trees and nearby fields.

“There were no flowers to feed on and most of the bees migrated to where they would find nectar. It was a terrible year for me,” Ng'ong'oni told Thomson Reuters Foundation at his farm in the Kuresoi area of Nakuru County, which this year has seen better rains.

Beekeeping is being widely introduced to communities in East Africa as an alternative way of making money as climate change brings harsher weather.

said even the bees are struggling to deal with drought and worsening heat extremes, despite his having planted a woodlot of trees to help provide nectar.

University’s school of agriculture and veterinary sciences, found in a 2016 study that recurrent droughts were among the factors limiting the use of beekeeping as a climate coping strategy, largely because honey production fell in drought periods.

The area he and colleagues studied in Kitui County, in eastern

Kenya, “showed a notable decline in productivity attributed to drought, deforestation and inefficiency” by farmers, the study said.

Philip Kisoyan, a programe officer at the UN Food and Agriculture Organization in

Kenya, said he had also seen evidence of problems.

Kenya’s bees are usually active from April to December, as plants flower. But last year, buzzing bees were a rare sight, Ng'ong'oni explained.

“By March, we expect the rains to start falling but when it delays, then it rains for a month or two and stops, trees get shocked and don't get to produce many flowers,” he said.

“And since there is nothing to feed on, bees start eating the honey available instead of making it.”

Drought isn’t the only problem confronting

“We have a major problem of suitable honey beekeeping areas due to drought, deforestation and pesticides all contributing to reducing bee populations,” said Muo Kasina, head of the National Sericulture Research Centre.

Still, beekeeping has a place as

That means planting a diversity of plants and indigenous trees in beekeeping areas, preventing deforestation and adopting farming practices that avoid the use of pesticides during the flowering period, Kasina said.

During drought periods, “a farmer needs to leave two combs with honey per hive when harvesting” as well as provide fresh water each day close to the hives, he said.

Ng'ong’oni said he has usually left honey for his bees “but they eat all the honey so fast when it is very hot”, he said.

Afterward the bees swarm and leave until the rains come, despite him providing molasses and sugar syrup to try to help feed them, he said.

To help beekeepers make the most from their hives, Kasina said they should look to products beyond honey.

“Farmers can sell beeswax and propolis. They can be trained on how to extract bee venom and produce royal jelly. These are unique products that have high market,” he said.

Breeding bees to get more genetic variability and resilience also can help, said Kisoyan of the FAO.