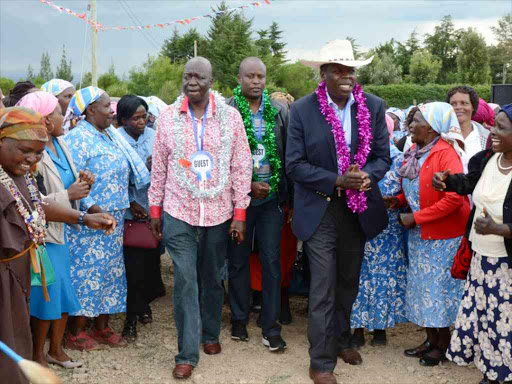 Former Gem MP Jakoyo Midiwo has opposed the ongoing referendum politics saying it is not helpful to the country.

The legislator said those propagating the debate are putting the country in an electioneering mood at the expense of development.

Midiwo said so since he has "not heard President Uhuru Kenyatta and ODM leader Raila Odinga say there will be a plebiscite".

"What are these people talking about? Some of the changes we need in our country do not even require a referendum," he said.

Speaking in Narumoru, Nyeri county on Sunday, Midiwo said: "Some politics will not move the country forward."

"It will cause too much opposition to the unknown...I have never heard President Uhuru or even Raila say there will be a referendum," he said.

The ex-legislator said the two leaders should focus on uniting Kenyans "as failure to do so may lead to chaos in future."

"As Kenyans, we should have the freedom to visit any place in this country without fear," the former National Assembly deputy minority leader said.

He had attended a funds drive at Kahuho Catholic Church.

Midiwo said "it is unfortunate that some people have started opposing a referendum that is not there in the first place."

"What people need now is not politics but development...Kenyans want an organised country that is free of corruption and theft of public funds."

Uhuru and Raila, he said, have the greatest responsibility of restoring peace and leading Kenya down the prosperity path.

Kenyans, he added, have enough experience of what dirty politics can do to a country like it was during the 2007 post-election violence skirmishes.

"We must begin to build a nation and we have no choice," he said.

He was accompanied by Kieni MP Kanini Kega and Devolution CS Eugene Wamalwa.