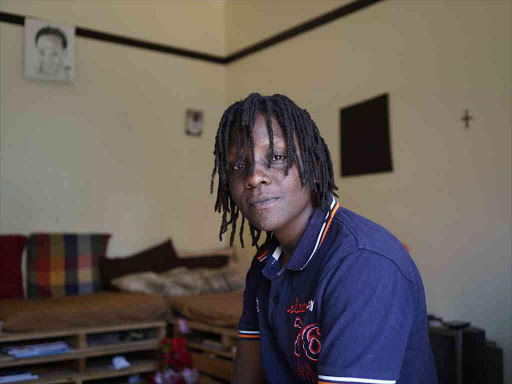 Transgender man Jordan Zeus, 24, sits in the house he lives in with his girlfriend on the outskirts of Kampala, Uganda. April 20, 2018. /THOMSON REUTERS FOUNDATION

Shawn, a young transgender man, was sitting in a public minibus in the

Ugandan capital, when an old schoolmate boarded and started loudly calling him by his former female name, astounding other passengers in the conservative nation.

The conductor then attempted to lock Shawn in the vehicle so that everyone could 'check' if he was male or female.

"When people give you trouble like that, it makes you concerned about who you are and the choices you've made," said Shawn, who declined to give his full name.

"If I say I'm a man, am I really a man? Am I man enough? ... You start thinking about hormone therapy. Is it that that makes you a man?"

Being transgender is not illegal in

Uganda, which is famous for its stringent anti-gay laws, but there is little understanding of people who do not identify with the gender they were born with.

Ugandans believe transgender people are gay, leading to discrimination and violence in a political and religious environment often hostile towards homosexuality.

Shawn has never taken a minibus again and, like all transgender men interviewed by the Thomson Reuters Foundation, said he now leads a secluded life - mostly avoiding public spaces and social situations.

"Some transgender men ... think that if I go home and someone doesn't remove my shoes or cook for me, they are undermining my masculinity," said Shawn.

"But have we taken the time to interrogate why some of these men are actually like this?"

and describes himself as a "feminine man", said his experiences of discrimination have opened his mind to feminism.

The expectation that men must provide financially for their partners encourages gender-based violence, he said, particularly among transgender men who often have trouble finding work.

There are no legal provisions for those who want to change their official gender status on identity documents inUganda, which often creates problems getting formal employment.

"Women have lived with these injustices for years," he said.

"Why would we feel that being more masculine, more violent and more powerful should be what defines us as men?"

Transgender men say they are denounced if they do not fulfil male stereotypes, like appearing physically strong and being the breadwinner, yet they are also treated as inferior by those who consider them women, from family to officials.

Jordan Zeus, a transgender man who lives with his girlfriend just outside Kampala, said his gender identity made every stage of growing up difficult - and dangerous.

"My uncles burnt down all my clothes," said the 24-year-old.

Zeus left home and went into further education but he did not finish because of further harassment and negative reactions from teachers and fellow students.

He said he now has a good relationship with his mother but she still asks about "babies, boyfriends and marriage".

"For parents in an African setting, they think girls can change any time, that lesbians will grow out of it," he said.