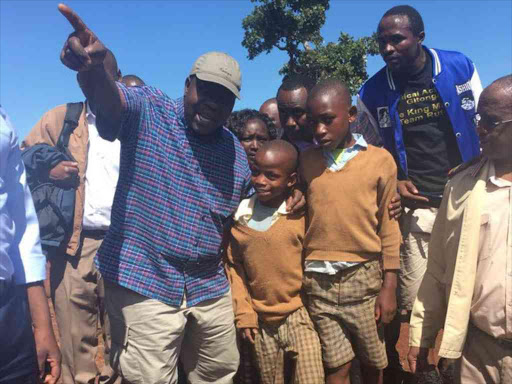 Interior Minister Fred Matiang'i in Subukia, Nakuru county, to check the status of search and rescue operations following the Patel Dam burst in Solai, May 10, 2018. /COURTESY

The number of people who died after a dam burst in Subukia, Nakuru county, has risen to 32.

The Patel Dam in Solai burst its banks on Wednesday night.

According to Red Cross, approximately 500 households have been displaced.

It said 41 survivors were taken to hospital, 35 of them were discharged while six are still in hospital.

Four at the Provincial General Hospital and two at the Bahati Sub County Hospital.

be seen when the rains are over. It is our duty to help the families recover from these disaster," said Red Cross Secretary General Abbas Gullet.

"It is a double tragedy and these communities have been rendered more vulnerable because of the cyclical disasters and their coping mechanisms has been totally depleted,” he added.

Interior CS Fred Matiang'i said the death toll from the tragedy could be higher than expected.

The mega dam is located inside the farm of prominent farmer Mansukul Patel in Solai. Its

walls are said to have caved in due to the high volumes of water following heavy rains that have been pounding the country.

The floodwaters swept away powerlines, homes and buildings, including a primary school, a Reuters photographer on the scene said, as rescue workers picked through rubble and mud searching for survivors.

and other local leaders visited the scene to assess search and rescue operations.

At least 200 Kenya Defence Forces soldiers arrived in choppers to help Red Cross and the county.

Matiang'i did not give numbers in his address to the press but said more people were likely trapped.

"There should be no confusion and no wasting time," he said, while directing thorough logistical, health and other operations. "The national government is working closely with the county and is at hand to assist the families affected."

He said food and shelter will be provided.

Mary Karimi said she could not find any of her children, including a four-year-old.

"When we heard noises, we thought it was raining heavily nearby. I'm so confused. I hope they are alive," she said.

In his statement, KInyanjui said:

"The water has caused huge destruction of both life and property. The extent of the damage has yet to be ascertained,"

Officials said the goal is to complete the search before it rains today.

Two more dams in the farm which will be assessed. Local leaders are seeking to find out whether the farmer was licensed to erect those dams, amid concerns about the condition of the remaining two which are also said to be full, a BBC correspondent said.