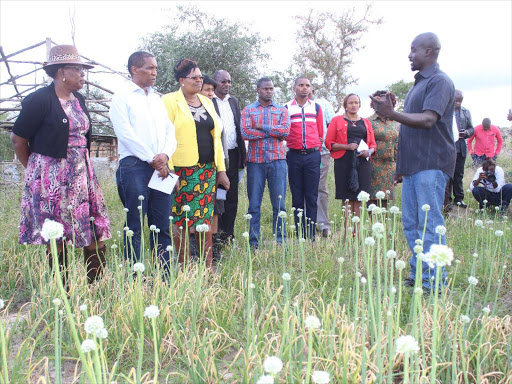 Murang'a MPs in a demonstration farm at Kenyatta village in Yatta constituency where they were trained on water harvesting and commercial farming.

The national government is set to construct hundreds of water pans in Murang’a to help locals harvest rainwater for irrigation and turn the county into a food basket.

The water pans that will be done through local MPs in villages worst hit by droughts.

Six MPs who went on a benchmarking visit to Yatta constituency that is extensively using water harvesting to irrigate crops throughout the year said Agriculture and Irrigation Cabinet Secretary Mwangi Kiunjuri will start the programme in a few weeks’ time.

The leaders visited Kenyatta village where a church-based organization, The Christian Impact Mission has revolutionized farming through water harvesting.

The organization led by Bishop Titus Masika has helped construct over 4,000 water pans and brought locals together into commercial villages through which they market theirs produces together.

Masika said the organization embarked on the farming programme in 2009 when a severe drought hit Yatta constituency causing locals to feed on cats and dogs.

He said six months after the programme started, locals had already engaged in contract farming to export French beans and other horticultural produces.

“It, however, took a lot of training to change their mindset and help them embrace the new farming practice to save them from poverty,” Masika said.

Addressing the MPs at his 25 acres demonstration farm in the village, Masika noted that his community-based transformation model has been adapted in Makueni County and the neighbouring Tanzania and Rwanda countries.

He said locals in the area that receives only three weeks of rainfall every season have been transformed into millionaires just by farming in farms as small as one acre.

“The water pans enable farmers to plant offseasons and sell their produces at much higher prices than other farmers. When we take our tomatoes to Thika market, our prices range from Sh100 to Sh200 while others sell at Sh40,” he said.

The simple water pans, he said are normally10 feet long, 10 feet wide and 10 feet deep and are dug by the farmers themselves before installing dam liners that help them store water for up to 6 months.

The MPs resolved to take groups of 50 people from worst-hit areas in their constituencies for training at the farm before the programme starts.

Gatanga MP on his part said it was shocking to see that farmers can become millionaires from just one acre.

He said Ithanga area in his constituency that heavily relies on relief food shall now become self-reliant when the programme is fully implemented.

“There is no reason why Murang’a should not succeed if this programme has succeeded in such a place as Yatta,” Nduati said.