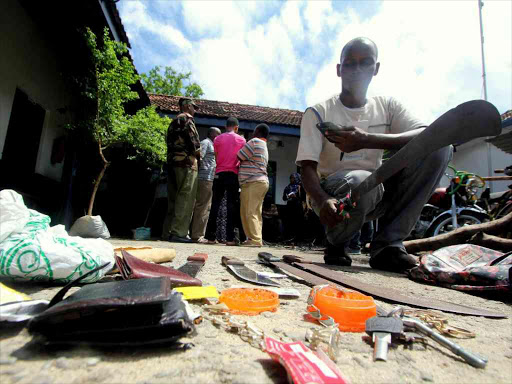 Machetes and drugs recovered in Mombasa during a past operation targeting the Wakali Kwanza criminal gang. /FILE

Politicians hired proscribed criminal gangs to terrorise their opponents during the 2017 election, the annual report on national security shows.

In an indictment of the country's political leadership, the report tabled in Parliament by President Uhuru Kenyatta indicates that some of the gangs caused the chaos that were responsible for the poll-related chaos that rocked the country last year.

The report, with the imprint of the National Security Council, appears to back a separate survey by the National Cohesion and Integration Commission that concluded 90 per cent of Kenya's criminal gangs are mobilised, financed and deployed by politicians.

“During the 2017 General Election, some politicians sourced the services of some criminal gangs to target their rivals,” the report states.

The new 35-page report was presented by the head of state on Wednesday, as he delivered his State of the Nation address. That was just a day after Nairobi CBD Association chairman Timothy Muriuki was violently attacked by goons in the full glare of cameras.

The attack has been linked to a high-profile city politician. All suspects are still at large.

The annual report to Parliament — which will be debated — says 104 organised criminal groups have been identified and proscribed.

“In Nairobi, criminal groups like 40 Brothers, Gaza, Super Power, remnants of Mungiki, among others engage in extortions, muggings, control of bus termini and peddling of drugs,” the report states.

In Mombasa, the report lists Wakali Wao and Wakali Kwanza as among most dangerous criminal groups, while in Kisumu there are the Marines and China Boys.

But in what could raise questions about the country's policing standards, a similar report tabled by Uhuru last year had warned that politicians were forming militias to protect themselves, ensure victory and cause trouble for their opponents.

Political thuggery began during party primaries and climaxed after the nullification of Uhuru's victory in the August 8 General Election.

"Some politicians form militias to advance their own interests. These criminal groups have continued to hamper security efforts in some parts of the country, thereby slowing economic development," the report stated.

However, no politician or their goons has been arrested in regard to the violence that was witnessed in various regions.

At the height of agitation for electoral justice by the opposition, the National Resistance Movement, an arm of NASA, was declared an organised criminal group by Interior Cabinet Secretary Fred Matiang'i.

This was after NRM officials led by fiery lawyer Miguna Miguna attended or officiated at the swearing-in of Opposition chief Raila Odinga as the People's President on January 30.

The NRM ban was overturned by the High Court.

The new report states, however, that some criminal elements have infiltrated the boda boda business, particularly in urban areas

Criminals take advantage of the versatility and manoeuvrability of boda bodas as a mode of transport to easily flee after committing a crime.

For the first time, the security report explains the measures the government undertook to contain the unrest that pushed Kenya to the brink of ethnic chaos.

Through the Communication Authority of Kenya, the report states, the government ensured that mobile telephone network operators did not distribute bulk hate messages that might incite violence.

Such hate messages were blamed for the 2007-2008 post-election bloodletting.

The government also conducted what it termed a "national conflict and electoral risk assessment" that informed their strategies.

“The assessment indicated that various parts of the country have and are still experiencing ethnic and inter-communal conflicts, partly fueled by political differences, incitement and competition for resources such as land, water and pasture,” the report states

The report also delves into the war on terror. It indicates that in the past one year alone, 80 cases of terrorism were recorded, resulting in 82 deaths and injuries to 118 individuals.

The report attributes the attacks to Kenya's proximity to Somalia, Kenya's strategic position in the fight against terror and Western interests in the country.

The reports warns that al Shabaab and the dreaded Islamic State in Iraq and Syria (ISIS) have heightened their operations in the region.

According to the report, there is continued mobilisation, deployment and concentration of al Shabaab militants along the Kenya-Somali border.

“Furthermore, they [al Shabaab] remain keen on recruitment and radicalisation of youth into the terror groups, through internet platforms, among others, while utilising returnees to perpetrate attacks,” the report states.

The report says the country is losing more Sh30 billion in annual revenue to counterfeits of all kinds and illegal trade.

Kenya's geopolitical position and robust economic environment, the report says, makes it attractive both as a transit route and destination for counterfeits and illicit trade.

However, the government says the Anti-Counterfeit agency has established regional offices in a majority of the entry points and major towns.

During the year under review, the Financial Reporting Centre received 2,662 suspicious transactions reports.

The Constitution makes it mandatory that the National Security Council chaired by the President must report annually to Parliament on the state of Kenya's security.

The council comprises the President, the Deputy President, Cabinet Secretaries for Defence, Foreign Affairs, Internal Security and the Attorney General.

Other important members are the KDF chief, NIS director general and the Police Inspector General.