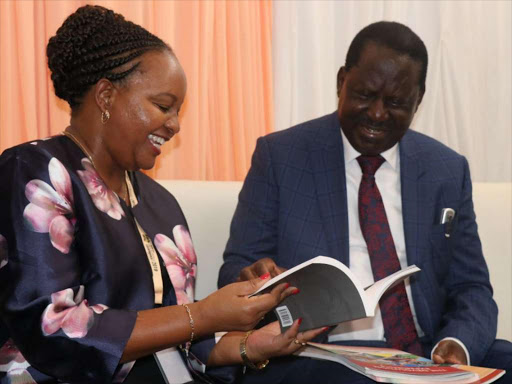 The third structure provincial would be a bridge between the national and county governments to ensure a seamless relationship between the two and equitable development across the country.

"My proposal is that we adopt a three-tier system that retains the current counties, creates regional governments and retains the national government and with a very clear formula for revenue sharing,” Raila told delegates to the Fifth Devolution Conference in Kakamega.

The proposals are similar to the provisions in the 2005 Bomas Draft Constitution that proposed 14 regional governments.

The Opposition leader, whose ODM party has backed calls for a referendum to reintroduce the position of executive Prime Minister, said the third structure will boost development in the 47 counties.

The proposal for a referendum to amend the Constitution has been vehemently opposed by Deputy President William Ruto. It is not clear whether Raila’s proposal enjoys the support of his counterpart in the unity deal, President Uhuru Kenyatta.

Raila stated that his proposal is part of the unity deal with President Kenyatta unveiled on March 9. Its details are still shrouded in mystery.

Ruto has flatly rejected any amendments to re-distribute executive power to a Prime Minister and deputies and Raila’s proposals could see the two leaders on opposing sides once again before the next polls.

Ruto spearheaded the opposition to the current Constitution during the 2010 referendum and lost.

It was the second referendum after the 2005 contest in which the Orange Campaign (No) — then grouping Raila, Uhuru, Kalonzo, Ruto among others united under the Orange (No) to defeat the Banana (Yes) side spearheaded by President Mwai Kibaki and bury the Bomas Draft.

That draft divided Kenya into 14 regions, each made up of several districts. It was rejected to pave way for another popular version, the Naivasha draft, which was enacted into the current Constitution that retained a powerful presidency with more centralised powers.

Creating the units with the size and population that made them economically viable would have seen immense development, according to the drafters.

Yesterday, Raila said he favoured elements from the Bomas draft.

"We need to bite the bullet and revisit the structure of devolution. It is time to look at how to recover this original spirit,” Raila told the three-day conference attended by more than 6,000 delegates.

He said the three-tier system of government would offer a lasting solution to the problems posed by the sizes of the economies of counties, some very small, that are grappling with lack of systems to tame runaway corruption.

Uhuru also backed regional blocs to spur growth and create jobs when he opened the conference via video link on Tuesday.

Raila praised formation of the 14-county Lake Region Economic Bloc of Western Kenya and asked county assemblies to cooperate by passing laws to actualise the bloc.

"Our aim is modest, humble and noble. We continue to encourage our counties to explore the formation of economic blocs to address some of the challenges identified,” he said.

"I encourage all counties that are exploring such formations to soldier on and their assemblies to cooperate,” he added.

Yesterday the chairman of the Committee of Experts that drafted the current Constitution, Nzamba Kitonga, said they dropped a proposal for the three-tier system of government because many Kenyans opposed it.

"We had the three-tier system in the first draft but the majority of the submissions from the public were against the regional system of government. The people instead wanted counties to be the epitome of devolution,” Kitonga said.

The Bomas Draft proposed that the people’s sovereign authority be exercised at national, regional, district and locational level.

Regional governments would consist of a regional legislative assembly and a regional Executive.

A regional premier and a deputy were each to be elected by an electoral college consisting of all the elected members of district councils within the region.

The executive authority of a district was to be exercised by a district executive committee consisting of an elected governor, deputy and their appointees.

The locational governments were to provide the district council with full and regular reports concerning matters under the control of the district executive committee.

Raila’s radical proposal to amend the Constitution through a referendum is the second since the August 8, 2017, General Election.

Tiaty MP William Kamket (Kanu) last month submitted a radical Bill that seeks to create an executive Prime Minister with two deputies. It reduces the President’s powers and limits him to one seven-year term.

The Bill is awaiting national Treasury assessment of the cost of implementation.

Ruto and his allies have publicly opposed the Bill on the grounds that it only aims to create more political positions to benefit a few individuals.

Ruto is scheduled to address the devolution conference today. It remains to be seen what stand he will take, if any, on the former Prime Minister’s proposal to change the structure of government.

He is expected to further rally governors to cooperate with the national government in implementing the Big Four agenda.

Yesterday, Raila raised concerns over implementation of the Big Four on devolution and called for negotiations between the two levels of government. He said most of the agenda items are devolved and asked if their implementation by the national government will not undermine the counties.

He nevertheless urged the counties to cooperate.

"This is also part of the MoU of the Building Bridges to a New Kenyan Nation initiative. Counties must work together regardless of the political affiliation of their governors, senators and MCAs.”

Makueni Senator Mutula Kilonzo Jnr backed Raila’s proposals and said the referendum to amend the Constitution should happen between now and 2020 before the polls.

"The famous handshake should have provided a formula and timeliness where expected legislation changes to the Constitution through a referendum or parliamentary initiative should take place,” Mutula Jnr said.

"We don’t want the succession politics of 2022 to interfere with such initiatives. During the President’s State of the Nation Address on May 2, he should provide a date and formula for any legislative changes."