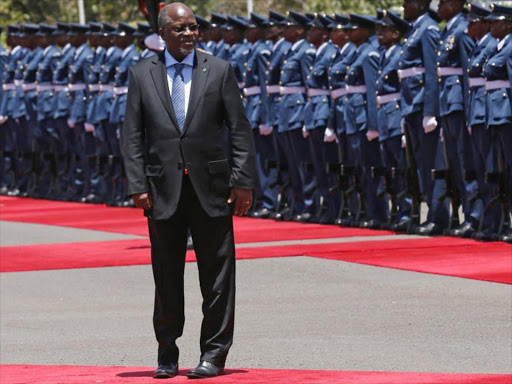 Tanzania’s President John Magufuli after inspecting a guard of honour in Kenya. /REUTERS

Tanzania's communications regulator has given bloggers two weeks to register their platforms under strict new online content rules, amid concerns that the government is cracking down on internet users.

Regulations passed in March make it mandatory for bloggers and owners of other online forums such as Youtube TV channels to register with the government and pay up to $900 for a licence.

Digital activists said the move was part of a crackdown on dissent and free speech by the government of President John Magufuli, who was elected in 2015.

"All online content providers are required to complete the application process before May 5, 2018," the state-runTanzania

Communications Regulatory Authority (TCRA) said in a statement. The process was opened on Saturday.

"The new regulations seek to violate user privacy by revealing details of anonymous whistleblowers to authorities," said Maxence Melo, who runs a popular social media website, JamiiForums, and has been enmeshed in a court battle for months to keep the site online.

Bloggers who fail to comply with the new rules could be fined at least TSh5 million ($2,200), jailed for a minimum 12 months, or both.

are individuals, without registered companies, making it difficult for them to meet the requirements, activists say.

Magufuli on Friday ordered authorities to take legal action against anyone deemed to be abusing freedom of expression by posting misleading anti-government statements on social media.

Last week, police briefly detained two musicians, including one of

Tanzania's most popular singers, after they posted video clips that authorities deemed obscene.

Critics have accused Magufuli's government of infringing free speech and democracy with the new regulations.

The number of internet users in

rose 16 per cent in 2017 to 23 million, around 44 per cent of the population, with most using their smartphones to go online.

This month, Uganda, another East African country moving to regulate internet use, announced plans to slap a new tax on social media users.