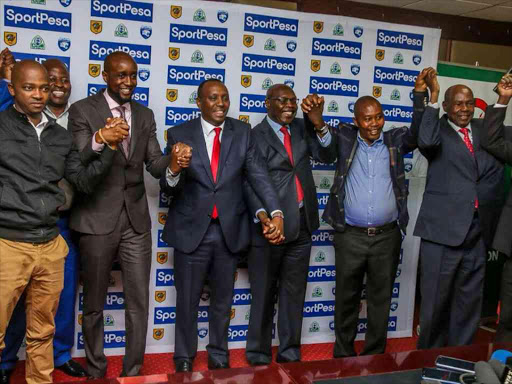 SportPesa has signed new partnership agreements, albeit of lower amounts than before, with four football entities in the country.

The betting firm will be the main sponsor of

Gor Mahia and AFC Leopards and the title sponsor of the

SportPesa will feature prominently on the front of the Gor Mahia and AFC Leopards shirts for this period.

Football Kenya Federation has entered a three-year partnership with the company, the goal being to improve the standards of local football. It will get Sh69.4 million for three years.

The previous deal with Gor Mahia was for five years at more than Sh200 million while AFC's was Sh45 million annually for five years.

KPL got a deal worth Sh450 million and Kenya Rugby Union more than Sh600 million over a period of five years.

SportPesa CEO Ronald Karauri noted on Monday that the company remains committed to supporting local sports despite the economic policy setbacks they have suffered.

In 2017, the betting firm withdrew sponsorship for local sports clubs and unions due to the 35 per cent tax on revenue.

The withdrawal began on January 1, 2018 after the CEO announced that their

cost of doing business would be affected by the finance law that President Uhuru Kenyatta eventually signed.

“We are extremely excited to be able to partner with these four powerful industry players. As we have always maintained, developing local football talent is a key vision for our company."

get Kenya where it should be; among the great football nations of the world.

“Partnerships mean a lot to us as they enable us to tangibly impact communities and leave a lasting legacy. The journey of Qatar 2022 continues and we are honoured to be part of that journey."

in what will be a major score for the country’s football development goals.

is expected to arrive on May 11 for a five-day tour that will also feature several other activities.

The team that will face Hull City will be decided at a Mashemeji Derby on May 1, when AFC Leopards will face off with Gor Mahia

at Afraha Stadium in Nakuru.

The winner will book a date with the Nigel Adkins-led side.

a coaching clinic and a training camp during the Hull City tour.

A Kenyan AllStars team faced a development-side Hull City team at the KCOM Stadium in the UK on February 27, 2017.

The team was made up of 18 top players picked from various SportPesa Premier League clubs.

Hull City Coach, Nigel Adkins, said: “This is an exciting opportunity for the club to be able to play in Kenya. The passion for football out there is enormous and we can’t wait to interact with the local teams. I’m very honored to be the first Coach to bring the team to Africa."

The exhibition match between Hull City FC and the Kenyan team will be played at Kasarani Stadium in Nairobi on May 13.