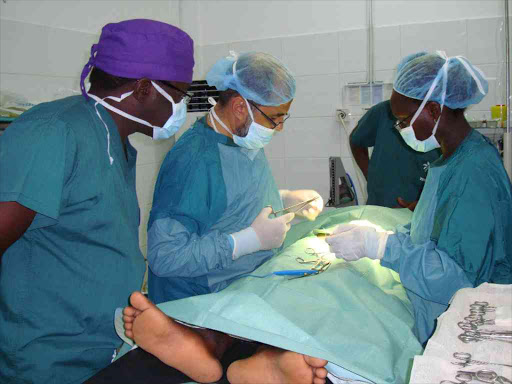 A file photo of doctors from Nairobi performing a minor surgery at Palm beach hospital in Diani.

The government will not revoke its decision to contract 100 Cuban medical specialists.

Nzioka Waita, who is State House Chief of Staff and Head of the President's Delivery Unit, gave explanations in a statement on Sunday.

Waita started by noting that the

doctor-patient ratio remains 1:16,000, "which means we are not anywhere near meeting the ratios required for the provision of quality healthcare to a majority of Kenyans"

the partnership will bring in specialists in the complex areas of medicine, including ontology, nephrology and dermatology.

“Our efforts to boost access to specialised medical service at county level is not a condemnation of our own professionals," he said.

"Rather, it is mere recognition that we need more specialised doctors, especially those prepared to leave the comfort of big cities to serve in rural communities where they are more needed."

Waita cited another goal as building

expertise and capacity at the grassroots level four and five hospitals.

He said the foreign

The Chief of Staff further noted that the government is

committed to recruiting more local doctors but that their training takes long so it is easier to import.

Health Cabinet Secretary Sicily Kariuki said Kenya is currently grappling with a shortage of 42,800 health workers, a state of affairs that stands in the way of efforts to ensure universal healthcare.

According to reports by Cuban newspaper 14ymedio, the doctors have already started training in the capital Havana.

They are attending classes to learn English, the Kenyan public health system and the local culture in preparation for their assignments in the 47 counties.

The first batch of is expected in the country in July.

The Kenya Medical Association had asked President Uhuru Kenyatta to drop the plan and hire locals.

Doctors want the government to only seek foreign specialists as a last resort.

Post a comment
WATCH: The latest videos from the Star
by LILLIAN MUTAVI @mutavikelykelly
News
22 April 2018 - 12:00
Read The E-Paper