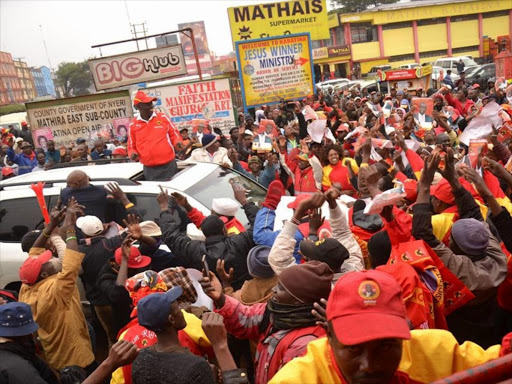 The women, led by Margaret Nyathogora, issued a statement on Saturday saying all the men involved in the incident should also be apprehended.

“Some of these leaders intimidate security agents. Unless action is taken, violence against defenseless women is bound to escalate,” read the statement.

Miano was slapped at Kiamariga police station by a man said to be the MP's supporter. This followed a confrontation between Gachagua and election officials during the by-election in Ruguru ward on April 18.

The woman claimed the MP directed his goons to attack observers and that he was heard telling a man identified only as Jack to organise for some people to be flushed out of polling stations.

“We were pained to see goons attack a young defenseless woman in front of policemen,” they said in their statement.

The MP defended himself saying the scuffle happened behind him as he talked to IEBC officials.

He added that no politician has control of what supporters do but noted that he does not condone violence.

"I cannot take responsibility for the actions of my supporters," he said. “I condemn violence against anyone. I don't believe political issues should be solved violently."

Gachagua said he would have intervened had he known there would be violence.

Amid investigations, Interior CS Fred Matiang'i ordered the immediate interdiction of Mathira West OCPD Kiptoo Birgen, saying he was compromised and that he lied to his seniors about the issuance of a P3 form to the observer.

Matiang'i said the OCPD also lied about entering the case in the Occurrence Book.

"I have personally taken over the matter. No Kenyan should [face discrimination] based on tribe or race," he said on April 20.