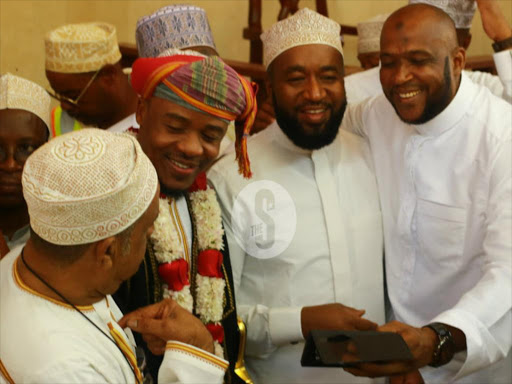 Ali Kiba has inked a multimillion-shilling deal to have the elaborate wedding ceremony to his Kenyan babe, Amina Khalef, televised on Azam TV.

Today, the bongo star will say, 'I do' at a nikka hosted at the

Masjid Ummu-Kulthum mosque in Kizingo. The ceremony will be attended by family and friends of Kiba and Amina.

"Ali Kiba's side of the family, including his mother, sister Zabibu and brother Abdu, were flown into the country days before the wedding. They are the only confirmed

family on the list. Not many people are invited, especially not his baby mamas. Also, 10 musicians are on the guest list. It will be star-studded," a close source to the couple told Word Is.

After the nikaa, where the couple exchange vows and sign the marriage certificate,

will host an exclusive guest list at his mansion in Kizingo. He is a family friend to Amina's kin.

"Getting into this venue will only be possible with an invite. The who is who will be in attendance for the lunch," our source said.

The reception, which is the most coveted event tonight, will be hosted by Mombasa Governor Hassan Joho at his palace in Vipingo Ridge.

A source close to the governor confirmed that Joho will attend the wedding after his stint in France for the Water Conference.

It is not clear if the TV station will be allowed to film inside Joho's residence, where the reception will take place. If they do, the common mwananchi will get to see how the rich live.

Ali Kiba will hold another grand ceremony with Amina in Dar es Salaam on Thursday next week.

Congratulations, Mr and Mrs Kiba on your nuptials.