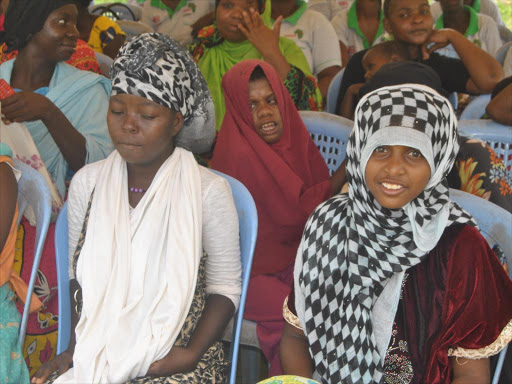 Children with Autism during the Autism Awareness campaign meeting at Msabaha grounds in Malindi Sub county on April 13./ALPHONCE GARI

Kilifi county has launched a campaign geared at ending stigma and neglect against children with autism.

Majority of the residents believe that the disease is a form of curse associated to witchcraft or demons.

has been increased cases of neglect and stigma towards the affected.

Autism is a lifelong neuro developmental disorder that shows itself during early childhood and affects anyone regardless of gender, ethnicity or socio economic status.

However in Kilifi such Children are normally associated with demons (majini).

Parents to such children are normally stigmatized as people believe they are the cause of their children’s condition.

In the traditional language such children are called ‘kiti cha Majini’ (chair of demons).

Kenya Medical Research Institute has now partnered with Plan international, World Vision, Kilifi County Government, KUHENZA for the Children Centre, a Community Based organization and other stakeholders to spread the campaign against stigmatization.

On Friday they organized a sensitization campaign meeting at Msabaha grounds in Malindi Sub County which brought together Autism children and their caregivers to as part of the World Autism Awareness month.

During the meeting the director of Kuhenza for the Children Leonard Bonadi revealed that in Chakama area of Malindi Sub County a woman committed suicide with her child who had Autism because of stigma.

He said another family in Langobaya who has a child affected with Autism has been accused of being devil worshippers to enrich themselves.