Street children flushed out of Nairobi CBD in impromptu operation 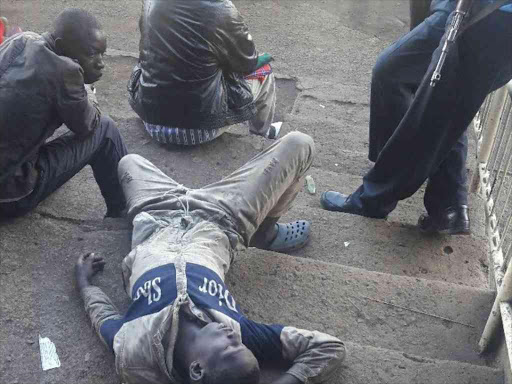 Some of the street children who were rounded up in an impromptu exercise in the Nairobi central business district on April 12, 2018. /COURTESY

Nairobi county flushed street children out of the town centre and took them to City Stadium in an impromptu operation on Thursday.

Peter Mbaya, who is Deputy Enforcement Director, reported that they have arrested between 10 to 30 street urchins every day since

the exercise began in February.

raised concerns about the lack of enforcement, which he said has caused the exercise to have little impact.

"We are overwhelmed by the task of making the city clean. The most affected area is that of street children as only 10 officers are in charge."

After the operation kicked off that month,

Some of the street children who were rounded up in an impromptu exercise in the Nairobi central business district on April 12, 2018. /COURTESY

Mbaya said those who were rounded up will be taken to rehabilitation centres after they are assessed, an exercise that usually takes place at Joseph Kang'ethe Primary School.

The street children are taken to centres including

Bahati, Shauri Moyo and Kayole, based on their gender and age.

Nairobians have complained about the numbers of street children, saying some attack them while others collect money for tricksters.

They have also complained about being pestered by children who sell sweets and chewing gum.

The county has rounded the street children up before but they have returned, resulting in the question of who is in charge of their welfare.

More on this: Who is in charge of the welfare of street children in Nairobi?

orphanages and rehabilitation centres in the county.

While launching the exercise in February, he noted that the goal is to secure their future.

In February, it was reported that Kayole centre had 70 children who had been rescued, Bahati 106, Shauri Moyo 30, Joseph Kagethe 52 and Makadara 114.

Sonko says all these centres have the capacity for more children to "ensure everyone in the city is safe and that human life is respected."