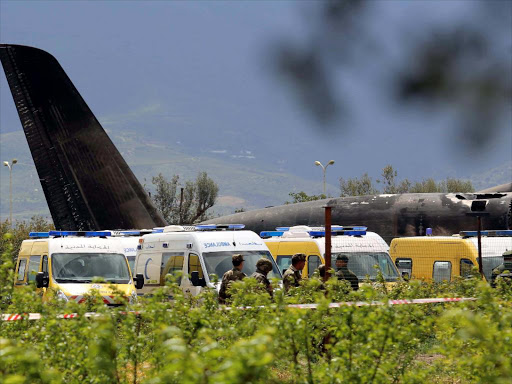 An Algerian military plane is seen after crashing near an airport outside the capital Algiers, Algeria April 11, 2018 REUTERS

Television footage showed crowds and emergency vehicles massing around the smoking and flaming wreckage near Boufarik airport southwest of Algiers.

A line of white body bags could be seen on the ground next to what media said was a Russian Ilyushin transport plane.

A total of 257 people were killed, most of them military, the defence ministry said. Ten crew and other people described as family members also died, and a number of survivors were being treated at an army hospital, the ministry added.

Algerian-backed group fighting for the independence of neighbouring Western Sahara – a territory also claimed by Morocco in a long-running dispute.

The plane was heading to Tindouf, an area on

Algeria’s border with Western Sahara, but crashed on the airport’s perimeter,

Tindouf is home to thousands of refugees from the Western Sahara standoff, many of them Polisario supporters.

U.N. attempts to broker a settlement have failed for years in the vast desert area, which has contested since 1975 when Spanish colonial powers left. Morocco claimed the territory while Polisario established its self-declared Sahrawi Arab Democratic Republic there.

Algeria’s defence ministry issued a statement expressing condolences to families of the victims.

An Air Algerie flight crashed in northern Mali carrying 116 passengers and crew, nearly half of them French, en route from Burkina Faso to

In February that year, an

killing 77 passengers and leaving one survivor.