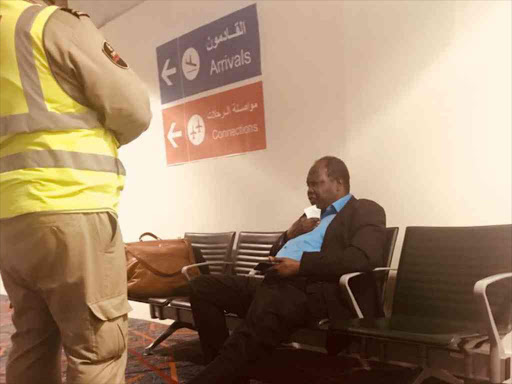 Lawyer and NRMKe General Miguna Miguna is pictured at a Dubai airport following his deportation, March 28, 2018.

movement remain the preserve of

state security and the subject of much

From his last social

general was last located in a hospital

at Dubai Airport, where he had been

and security agents after being

drugged and forced onto an Emirates

Miguna says he has neither the

passport of his acquired Canadian

nationality nor his native Kenyan one.

His saga bears the hallmarks of the

tribulations of another controversial

who 20 years ago was rusticated in

a foreign land after his passport was

revoked by the Kenya government.

thorn in the state’s flesh. He led the

which had become a nightmare

for Kanu soon after the return to

Shortly after this Easter, Mombasa

in a long-running compensation

suit launched by the former radical

Now living a less-eventful life in a

In an interview with

the Star, he said he has prosecuted

a strong case and believes he will

prevail against what he calls the

after half a century of independence.

Although the two cases bear some

comparison to what Balala faced

Both are victims of

are citizens whose conduct the state

frowned upon; both tried to return to

the country and were forced back out

Frustrated by his persistent

activism through the now-defunct

Islamic Party of Kenya, IPK, which he

it and declared he was not Kenyan.

Angered by his confrontational

defaced it, declared him an alien and

Twenty years after he was allowed

back into the country, Balala is still

waiting for justice. He believes the

conclusion of his suit which has

been heard by five different judges

has been delayed by political pressure

on the Judiciary after he allegedly

rejected two bids during the Moi and

Kibaki administrations to settle out

Balala had left Kenya to visit

Germany, but his situation changed

had launched the IPK, a feisty

youthful political outfit that was

go-to person for anyone organising political activity in Mombasa. He

angered the Moi regime when he

entered into cooperation with the

for treason and acquitted for lack

politics unbowed following what he

described as a sham trial.

“The clear plan was to detain me

until after the 1992 general elections.

There was no evidence of treason and

it was a malicious prosecution,” he

After the acquittal, he was warned

not to attend a by-election in South

Nyanza occasioned by the defection

of an opposition MP to the ruling

Kanu party. But he attended several

where he stepped up attacks on the

came in early 1994 when Balala

travelled to Germany to attend a

conference and raise money for his

human rights causes Before his departure, he was

alarmed when he went to renew

His new passport was

marked for expiry after only three

“When I asked why my new

passport would expire after three

months I was told that it was the

During his tour in Germany, he

travelled to London where, out of

the blue, he encountered a man who

identified himself as Mudavadi from

the Kenyan High Commission in

“After three weeks in London

someone accosted me at Heathrow

Airport, claiming to be from the

identified himself only as Mudavadi

and he told me straight away my

passport was to expire in two weeks.”

stranger was a Kenyan spy trailing

Mudavadi invited Balala to Bonn to

renew his passport. He acceded and

travelled to the embassy but soon

realised he had walked into a trap.

alerted Kenyan authorities about his

presence in London out of mutual

“When I gave him (Mudavadi) the

passport he was extremely happy.

He actually kissed it and vanished

into the embassy. I waited for three

days and he reappeared to tell me

he had information from Nairobi

that my passport would not be

Balala was now stateless, without

any documents to travel or seek

asylum in Germany. For five days

he was stranded in the transit zone

because “no airline was willing to

take me and the British government did not want me back in London,”

He was taken in by friends and a

Odinga, who paid for his upkeep and

was not Kenyan and should return to

Yemen, where he allegedly belonged.

“At least Miguna has admitted he

for my case, I do not understand

where the claim I was Yemeni was

plucked from,” he says.

That marked the beginning of a

titanic legal battle by Kenyan and

With assistance from the

US and the United Kingdom to

pile pressure on the Moi regime

to restore his citizenship. He also

filed suits in a German court and

at the European Court of Human

Rights in Strasbourg, seeking a

declaration that the revocation of

his citizenship was a gross violation

and officials from the Kenyan High

to courts and tribunals denying

Balala was its national.

In a letter to German authorities on

the official line from Nairobi that

Balala was not and had never been a

“Suffice it to say that the Kenya

is not a bona fide citizen of Kenya.

by descent and failed to renounce

this stature on his 23rd birthday in

conformity with our constitution

which does not recognise dual

And to demolish Balala’s case,

plays no significant role in the

he was “…neither a member of

Parliament nor known leader of any

This is notwithstanding the fact

that Balala who matriculated at

Allidina Visram in 1975 and later

Arabia was IPK’s spiritual guide and

an articulate leader whose oratory

had made him a the darling of many

at the Coast and a prime target for all

IPK had entered into a union

opposition party at the time, to erase

besides awakening the Muslim

visit the activist at his house in

Frankfurt to warn him not to return

to Kenya. Balala quotes him saying,

“You will not return to Kenya until

we tell you because you are a threat

to restore Balala’s citizenship and pay

him the equivalent of US$2 million in

Balala was not paid the money but

pressure and agreed to allow the

activist back home. The Kenya

government neither bought him an

air ticket nor gave him money for

support. He was promised citizenship

papers upon return but this was not

including a petition to the Queen of England, US President Bill Clinton

and other world leaders forced the

Moi regime to allow Balala back on

Besides the British refusing to

allow him to transit through London,

Kenyan papers issued by the mission

in Bonn, and was forced out.

“I was returned four times, once

in Mombasa, twice at JKIA and once

in Dar es Salaam. On all occasions I

was forced back onto the plane that

had flown me in and I returned to

paid for his air ticket on his fifth

attempt to enter Kenya and he

by Germany this time.

The Kenya government had promised

to reissue him Kenyan documents

upon return to the motherland but

that was never to be. His house in

Mombasa had been vandalised and

all his identification documents

After two months, Balala was

called by Immigration officials to

Nyayo House in Nairobi to pick his

new passport. But it was confiscated

again before he left the precincts.

“I was issued a new passport on

relieved and descended in the lift

from the tenth floor feeling good.

On the ground I was accosted

by state agents who asked me to

surrender the passport and up to

now it has never been returned,” he

to reclaim his passport.

“I sued and the state acknowledged

in court that it had taken my

passport,” he says, adding that his

suit was sabotaged when Kenyan

authorities threw him in jail in late

Although detention without trial

had been abolished in the statutes,

Balala was held without charge

during these years to ensure he did

not participate in the 1997 elections,

from which the opposition emerged

Balala identifies with Miguna and

who suffered similar withdrawal of

But he feels betrayed by

the Kibaki regime, which he believes

did nothing to reverse these policies,

substantially, or at all.

He also believes the British and

supported his tribulations and could

be cheering on Miguna’s humiliation,

actuated by the belief that opponents

of the successive regimes in Nairobi,

to date. Had I been someone who is

not spiritual and reads a lot, I would

have gone crazy by now,” says the

grandfather of 12, who says he is

about to complete his memoirs.

“I am a responsible man and I

rejected all attempts to compromise

me or destroy my people and country

through violence. Many times we

were provoked but we remained wise

and committed to our people.”

He adds, “I have been through

everything that Miguna is going

through now but this is the price we

have to pay to change our country

which is controlled by a tyrannical

colonial state that began with the

British and has not changed.”

“The British and Americans have

for imperial and ideological reasons.

Kibaki betrayed the cause by shifting

power back to Kanu’s tactics and

paved way for the Jubilee regime

which is a vestige of Kanu.”

Balala claims that under the Kibaki

and Uhuru administrations, his case

did not move because he refused to

kowtow to the new powers.

“I have been told to compromise or

make an undertaking that I will part

with 10 per cent of my compensation

but I refused because we are in this

thing not for financial gain because

we wish to strike a blow for freedom