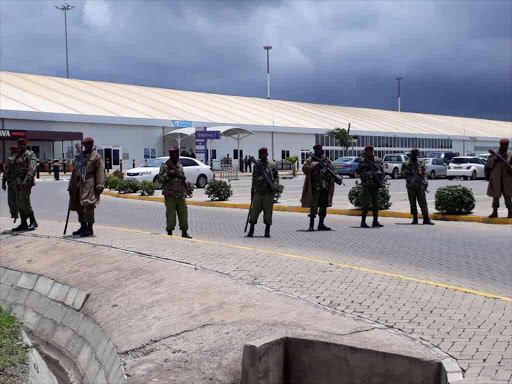 Journalists have been barred from accessing lawyer Miguna Miguna at the JKIA where he spent Monday night amid a problematic re-entry into Kenya.

They were chased away on Tuesday, a K24 journalist saying:

"Our crew has been escorted out by a GSU officer."

Reporters and camera men were spotted stranded and watching from afar, some having been told to "wait until further notice".

journalists were attacked and harassed by

armed police officers before Miguna was whisked away and

put on a waiting Emirates flight. He was to go to Dubai but he refused, a position that saw police rough him up.

Citizen journalist Steve Letoo was admitted at a Nairobi hospital with injuries this morning and discharged later.

On his Twitter page, he wrote: "The force police used to rough up the media covering [Miguna's return] was uncalled for."

Citizen journalist Steve Letoo at a Nairobi hospital following an attack by police officers at the JKIA in Nairobi, March 27, 2018. /COURTESY

The officers also attempted to harass KTN's Sophia Wanuna but she fought back saying she cannot be intimidated for doing her work.

Wanuna continued reporting live as Kenyans wondered, once again, why the government had to attack journalists.

"The assault meted on journalists is unacceptable," she said on the social media platform.

is not an absolute right.

Itumbi, who is State House senior digital communications director, said via Facebook: "If a police order is lawfully given, you leave and if you believe it was wrong, challenge it in court."

In the post on Monday night, Itumbi went on to note that "ugly

scenes" cannot be showed at international airports anywhere in the world.

Post a comment
WATCH: The latest videos from the Star
by NANCY AGUTU @nancyagutu
News
27 March 2018 - 09:00
Read The E-Paper