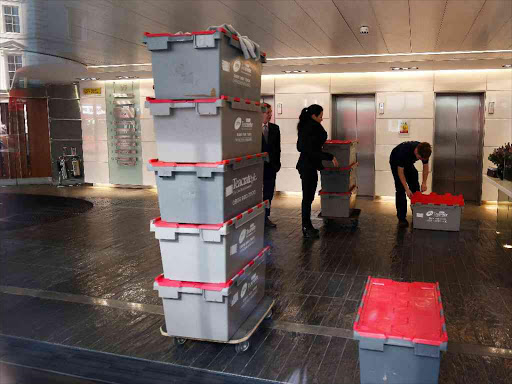 A man delivers storage crates to the building that houses the offices of Cambridge Analytica in central London, Britain, March 20, 2018. /REUTERS

Jubilee Party said on Tuesday that it had paid for "branding" in the 2017 presidential election from SCL, affiliate of consultancy Cambridge Analytica.

is at the centre of an election manipulation scandal involving Facebook.

Best known for helping Donald Trump's US presidential bid in 2016, the London-based consultancy also ran the campaigns of

Kenyatta in the 2013 and 2017 elections, according to video secretly recorded and broadcast by Britain's Channel 4 News on Monday.

Commenting on the role of SCL in last year's

Kenyan election, an ethnically divisive affair in which about 100 people were killed, Jubilee vice chairman David Murathe said: "They were basically branding and all that but not directly."

It was the first public comment by a senior official of

Kenya's ruling party on SCL's involvement in the election.

In Channel 4 News's "sting operation", Mark Turnbull, a managing director for Cambridge Analytica and SCL Elections, bragged about the extent of his firms' influence in the

Cambridge Analytica denied all allegations made by Channel 4 News, saying it was humouring the undercover reporters and trying to gauge their motives by actively encouraging them "to tease out any unethical or illegal intentions".

The consultancy is currently facing a search of its London office and questions from US state authorities after a whistle blower revealed it had harvested the private information of millions of people to support Trump's presidential bid.

Kenya. Cambridge Analytica is now becoming an international propagandist," said Junet Mohamed, a lawmaker for Raila's ODM party and its director of elections.

He is also Suna East MP.

However, Jubilee Senator Kipchumba Murkomen (Elgeyo Marakwet) denied any influence on the election, saying that social media were of only marginal influence in

despite its reputation as one of Africa's most tech-savvy nations.

"Those things don't influence elections in

is not America. In

Kenya, vernacular radio stations are more influential than those things."