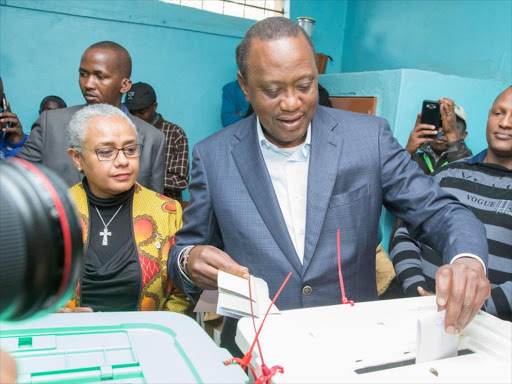 President Uhuru Kenyatta when he cast his vote./PSCU

British data mining firm Cambridge Analytica has confirmed that it was behind the TNA and Jubilee presidential election campaigns in 2013 and 2017.

In a undercover film broadcast on Channel 4 News in the UK on Monday night, Cambridge Analytica Managing Director Mark Turnbull confirmed that the company had worked for Uhuru Kenyatta.

“The Kenyatta campaign which we ran in 2013 and 2017,” he said in a secretly recorded meeting in a London hotel.

“We have rebranded the party twice, we have written their manifesto, done two rounds of 50,000 surveys, huge amounts of analysis, research, messaging. Then we’d write all the speeches and we’d stage the whole thing so just about every element of his campaign” , he said.

Cambridge Analytica is credited with helping President Trump to win the American presidential election last November and with helping the Leave side to win in the Brexit referendum in the UK last June.

It has been described as a "psychological warfare firm".

"It was like working for MI6. Only it’s MI6 for hire," a former CA employee told the Guardian last year.

CA typically charges around 6 million pounds ( Ksh840) to work on an election campaign).

The CA website says it is a "global leader in data-driven campaigning with over 25 years of experience, supporting more than 100 campaigns across five continents".

"Within the United States alone, we have played a pivotal role in winning presidential races, as well as congressional and senatorial elections," CA says.

CA pays Facebook and other third-party data companies for information about Kenya's undecided voters whom it will then bombard with social media posts and adverts.