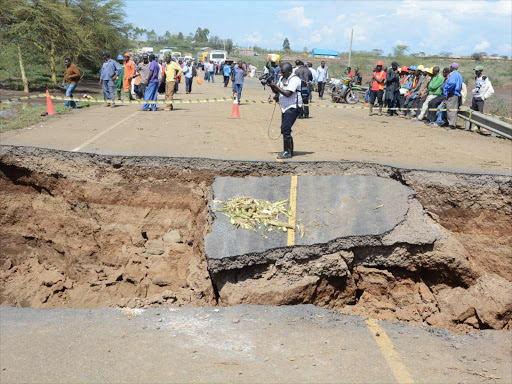 Part of the Mahiu Mahiu road that was cut off. photo/ANTONY GITONGA

The movement of the Earth crust and volcanic activities in the RiftValley are to blame for the current cracks in the region.

Geologist David Adede says the ongoing heavy rains across the country has little impact on what is happening.

Adede in an interview with NTV said the volcanic activities in the region is a clear indication of future disasters if not mitigated immediately.

This follows an incident where Mahi Mahiu road was split into two with a section of the road sinking.

But Adede in the interview said the volcanic activities around the Mt Longonot, Suswa and Mahi Mahiu all the way to Naivasha had resulted in the crack.

He said after the road cracked, a big hole opened and swallowed all the water which resulted in more cracks in the ground.

"The Great Rift splits Africa into two plates. With what is happening we have established one plate which is the Somali plate is moving away from the other plate at a rate of 2.5cm. In the near future if this happens we shall have Somali plate separating from the other Nubian plate," Adede said.

Adede said these splits are slowly happening underground and if mitigation measures are not put in place its impact can be dire.

"There is a great need for researchers to conduct a comprehensive study on the terrain of this region so that they can advise on where roads and residential buildings can be established. This can play a key role in dealing with such natural disasters should they happen," he said.

He said currently such activities are associated with cracks, more geothermal power in the region, tremors and earthquakes.

For now, all we can say the cracks and faults we are experiencing are caused by tectonic movements, he said.