Six people perish as floods wreak havoc across the country 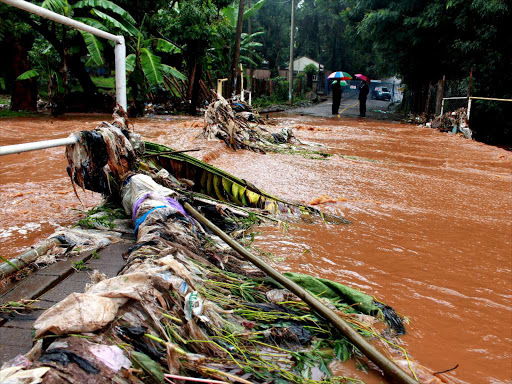 NEMA is asking Kenyans to be extra careful during this rainy season especially when crossing moving water.

The heavy downpour on Thursday has led to several deaths across the country.

In Kitui, five people are missing after heavy rains wreaked havoc in the county.

People cross in the rains in the CBD. photo/EZEKIEL AMINGA

The five were in a lorry that was swept away by flood waters.

"Lorry with five people on board swept away after River Enzui in Kasiluni village, Kitui, burst its banks," Red Cross said via Twitter.

At least two people including a class six girl have died in Kajiado following the rains.

County Commissioner David Kipkemei said the pupil in Kiserian died after being swept away while crossing a stream.

Kipkemei also said that a man's body was found in Enkirgirri River at midday.

director Geoffrey Wakhungu has said officers have been deployed to monitor areas likely to experience flooding.

hilly areas that are likely to experience landslides and those residing on illegally built structures should move urgently.

"We are asking Kenyans not to test their luck by crossing moving water. Those in a structure built on riparian land have been asked to move and currently our teams are monitoring the situation in Mathare, Huruma, South C and South B," Wakhungu said.

He said plastic bottles and bags are to blame for the current floods that have hit many parts of the city.

"I can confidently say that plastic carrier bags have significantly reduced. What is causing the blockage is the plastic bottles and as we engage stakeholders on the best approaches to do away with the bottles we hope they are seeing the current situation during this rain,' he said.

Wakhungu said reactive measures will not solve the current problems.

"The current blockage and flooding will automatically come along with water born diseases. All these waste that is being dragged on river banks causes bigger risks downstream especially along Nairobi river and we ask everyone to take precaution," he said.

Nairobi governor Mike Sonko has so far apologised to Nairobians and promised to ensure all blocked drainages are unblocked.

"My dear people of Nairobi, my heart goes out to all of you who have been forced to bear the dire conditions brought about heavy rains pounding in our region. It is indeed sad that all over the country the situation is similar and Kenyans have been forced to deal with damage, floods, road snarl-ups and even death," he said.

Sonko added, "Rains are supposed to be a blessing and not a curse. Towards this end, my government has hit the ground running to mitigate against the adverse effects we have seen since the rains started. As a start, I have today directed the Nairobi City Water and Sewerage Company to hasten the process of unlocking the drainage system all over the county".