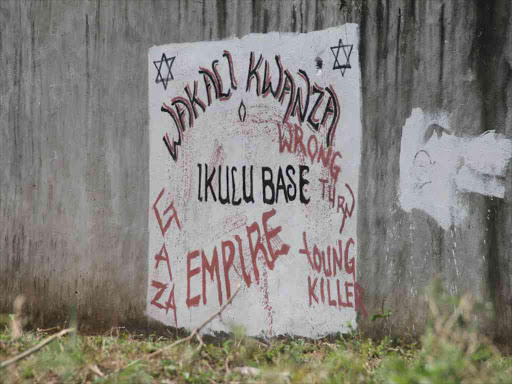 A Wakali Kwanza writing at Shika-Adabu in Likoni, a member of the gang was killed on Wednesday night Photo/Elkana Jacob

A gangster believed to be the leader of the Wakali Kwanza gang was shot dead in a foiled robbery in Kisauni, Mombasa, on Tuesday.

them at around 5.30 am in Swalihina area.

“The officers confronted the gang of three. They were ordered to surrender but one of them attempted to attack the officers with a machete. He was shot and disarmed but died on the way to Coast General Hospital."

Last week, another gang leader was killed in the same area by police officers on patrol.

Speaking to the Star, Musee urged gang members to surrender to authorities. He said seven presented themselves to police last week in the company of their parents.

The police boss also appealed for cooperation by residents as the criminals are local youths who need advice so they can denounce the illegal groups.

The mistrust between security officers and Kisauni residents is partly to blame for the insurgence of criminal gangs in the area.

Youths said they feel more secure in criminal groupings than with police - security agents are accused of executing arbitrary arrests so they can be bribed to release suspects.

They have also been accused of colluding with the criminals.