US Secretary of State Rex Tillerson leaves Kenya for Chad 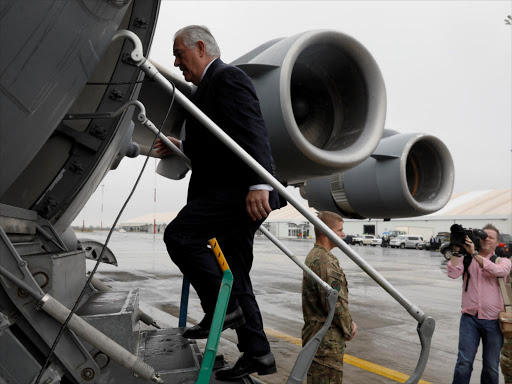 US Secretary of State Rex Tillerson left Kenya on Monday after a three-day visit that saw him meet the President and other officials.

Robert Godec and other government officials accompanied Tillerson to the JKIA.

He visited Djibouti and Ethiopia before Kenya and is now headed to Chad.

On March 11, Tillerson held talks with Juma and her

A statement from the Foreign Affairs office said the meeting discussed modalities for managing and deepening relations between Kenya and the US.

Juma and Tillerson agreed to establish bi-annual consultations that would review the state of Kenya-US relations and discuss and sign agreements to guide trade and investment.

The talks were a follow-up to the bilateral meeting held on Friday with President Uhuru Kenyatta.

When he arrived on Friday, the Secretary of State and the President discussed democracy and media freedom -

the government should not stifle the media and threaten the courts.

The government shut down three television channels in January on the day opposition leader Raila Odinga took a symbolic presidential oath, then defied a court order to switch them back on.

The stations had planned to live-stream the oath.

"We believe that there are actions that need to be taken in Kenya and that they need to correct certain actions like shutting down independent TV stations and threatening the independence of the courts," Tillerson told a news conference in Nairobi.