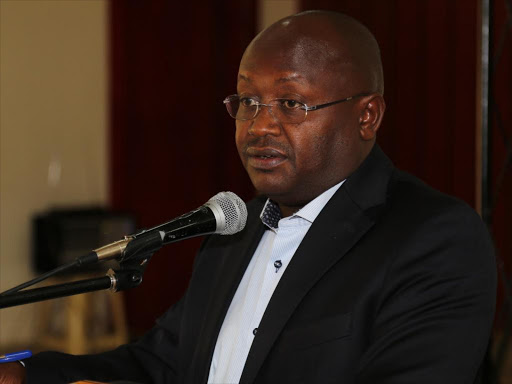 director Emilio Mugo has been suspended over the ongoing destruction of forests.

The move came just hours after

Environment CS Keriako Tobiko raised concerns about approaches in the management of forest. He said he wanted radical changes in the service.

The changes geared towards revitalising the organisation’s service delivery capacity.

to the organisation’s helm.

Kalenda was appointed with immediate effect as the Acting Chief Conservator of Forests to replace Mugo.

She is a seasoned forest resources management expert who will accelerate reforms initiated by the KFS board to enhance forests’ conservation countrywide.

Kalenda will be deputised by Esau Omollo who retains his Position as the Senior Deputy Chief Conservator of Forests.

Esau Omollo has been appointed as Senior Deputy Chief Conservator of Forests.

Laura Yego - Acting Corporation Secretary, replacing Esther Keige who has been sent on compulsory leave.
More on this:

Kinyua noted the service is committed to ensuring Kenya achieves a forest cover of more than 15 per cent by the year 2022.

He said this can be done by planting 170 million trees in the next five year.

"These changes are necessary for the sector to run smoothly,” he said. "The board will remain steadfast in supporting the management team to deliver against their mandate with renewed energy.”

Post a comment
WATCH: The latest videos from the Star
by RHODA ODHIAMBO @OdhiamboRhoda
News
12 March 2018 - 18:00
Read The E-Paper