Ruto gives Uhuru, Raila pat on the back for Harambee House meeting 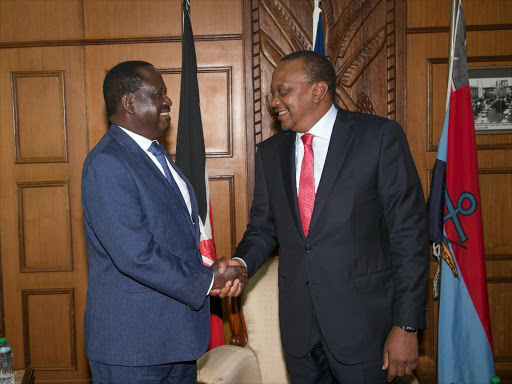 "Congratulations for being statesmen. You have risen to the moment for Kenya

and against hate, negative ethnicity and division," he said via twitter on Friday.

Ruto, who was missing during the talks at Harambee House, said the meet up will bring unity, stability, and transformation to Kenya.

His post was greeted with mixed reactions from his followers and supporters.

"You too have to meet Raila cos Nyanza people might change their minds [in] 2022,"

"2022 will be a very easy ride for you. someone from Tingas side will be your running mate. Thats my prediction,"

@bobkelvin1515 said: "My Fren don't celebrate this reunion. It could mark the beginning of your downfall... Raila is keen on bringing electoral reforms which will be your biggest undoing."

"As long as it not just display for the moment they have done what's best for Kenya and Kenyans,"

their powerful gesture to working together is to move Kenya forward.

"Congratulations Uhuru for living to your promise of leaving behind a united prosperous nation as his legacy. Meeting Raila, his political arch rival was part of his promise to promote national reconciliation, healing & fostering unity among our citizens," Duale said.

"By doing this, both of you are leaving a solid legacy behind. I support!"

In a rare show of unity on Friday, Uhuru and Raila

told Kenyans they had set their differences aside and would work to unite the public.

The two met at Harambee House office of the President before addressing the press. They neither specified their strategies nor took any questions.

Raila, who was first to speak, noted ethnic division came to an end today and that he and his 'brother' will bridge the existing gap.

"We refuse to allow our diversity to kill our nation. We

have travelled so far ... we cannot make it to our destination without bridging the gap," he said.

"... we have to come together and solve the animosity that we have been pouring into the boat before we all sink. We shall not fail. If we stand firm we shall not fail."

In his address, the President

"All we want is a common understanding that Kenya is greater than any one individual. Leaders must come together to discuss their differences and what ails the country ... like ethnic divisions."