We feel safer in criminal gangs than with police - Kisauni youths 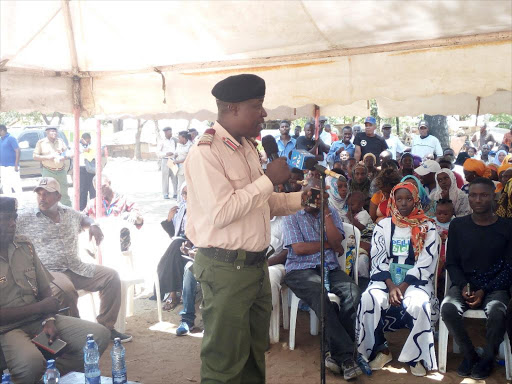 The poor relationship between security officers and Kisauni residents is to blame for the insurgence of criminal gangs in the area.

Youths, during a peace meeting at Kadongo Grounds in Mshomoroni on Wednesday, said they feel more secure in the criminal groupings than with police.

"In a criminal gang, fellow members will protect you more than you will be protected by police," a youth said at the meeting chaired by Mombasa county commissioner Evans Achoki.

The shocking revelation brings to the fore the underlying mistrust that residents have towards police officers.

The latter have been accused of executing arbitrary arrests so they can be bribed in order to release suspects.

"I used to see uniformed officers more as enemies than law enforcers. So, I wanted nothing to do with them," another female resident said.

Those who spoke added accused police officers of colluding with criminals.

The peace meeting was organised by the Kisauni Youth Organization which is chaired by Bruce John.

The residents told the security chiefs that few people are willing to give information about criminals to police because the same officers expose them.

"You give an officer a tip on who is committing crime in the area and the same criminal comes to your house threatening to kill you for speaking out," another speaker said.

"I would rather stay quiet and suffer with the criminals ruling the estate than risk being killed for giving a police officer information," another resident said.

They said this are the reasons most people have joined the Wakali Kwanza and Wakali Wao youth gangs.

John said at the meeting that an improved relationship between police and residents is a good starting point in fighting insecurity.

Achoki said the security forces have adopted new ways of dealing with insecurity and are embracing dialogue.

Kisauni was once a haven for criminals but that is slowly changing since area MP Ali Mbogo took over.

The MP has been organising meetings between police officers, parents and the youth, something that was not done frequent enough in the past.

Mombasa county commander Johnstone Ipara admitted that the relations between police and residents has not been good but promised this will change.

"This is something that we need to act on," Ipara said.

He helped raise Sh12,000 and a goat within five minutes for a youth group to start up a business, as a sign of goodwill.