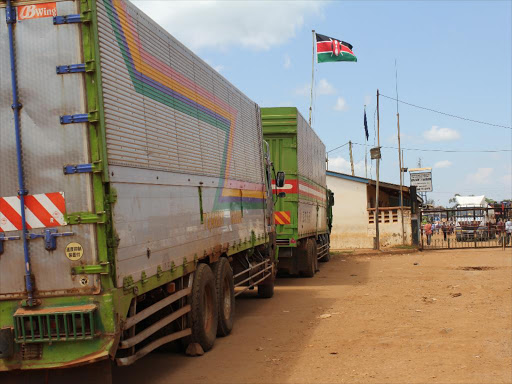 A file photo of a Kenyan flag pictured at the Busia border with Uganda. /MONICAH MWANGI

Uganda authorities have accused Kenya of playing a key role in the trafficking of teenage girls seeking foreign employment.

High Commissioner to Kenya Phoebe Otara told Citizen TV on Tuesday that many girls sneak into Kenya but end up "dumped" at the JKIA by cartels that con them after lying about helping them to find jobs.

Otara said the 15 to 19-year-olds arrive through the

Rwakaka, Buka, Malaba and Busia boarders with hopes of securing employment in Oman.

"We have intelligence that these girls are kept somewhere in Limuru before they are transported to the JKIA for various destinations. Those who cannot make it [for various reasons], or who could not secure visas, are dumped at the airport and later arrested and kept in cells," Otara said.

The High Commissioner further said that Ugandan authorities are often forced to part with lots of money to secure the freedom of these girls yet the problem seems to be escalating.

"We are worried about this trend and the heavy penalties imposed on these girls. The two countries need to look for better ways to seal the porous borders so we can redeem the dignity of these young girls," she said.

Otara also accused Kenyan authorities of making it difficult for Ugandan traders to do business in the country.

She said it is unfortunate that her country has opened doors to Kenyan traders at the border yet her countrymen are subjected to difficult environments.

"The EAC policy champions for free movement of goods and people. We know we have had small hiccups on the boarders but Kenyan authorities go to the extent of harassing and arresting traders from Uganda."

Otara dismissed claims that a lot of what is manufactured in Uganda finds its way into Kenyan markets.

Uganda has a strong policy that regulates the manufacture of alcohol, she said, adding "a few criminal elements" may be capitalising on

a black market in Kenya.

Otara said newly appointed Foreign Affairs Cabinet Secretary Monica Juma should be praised for her efforts to ensure relationships among countries in the East African Community are revived.

however refuted Otara's claims saying Kenya has always opened her doors to Ugandans.

"Our focus on the antelope should not be lost while we chase the squirrel. Even President Uhuru Kenyatta has made it categorically clear that his second term will focus on afrocentric foreign policies which put Africa first."

Ababu said this means Uhuru's administration has opened doors to African country, so Uganda which he termed a "default neighbour" is no exception.

He added that the EAC summit held in Kampala revived the hope of bringing Tanzania on board as all parties agreed to quash "small matters" on boundaries to allow free trade.

Read: Drug smuggling from 'Uganda is on the rise'