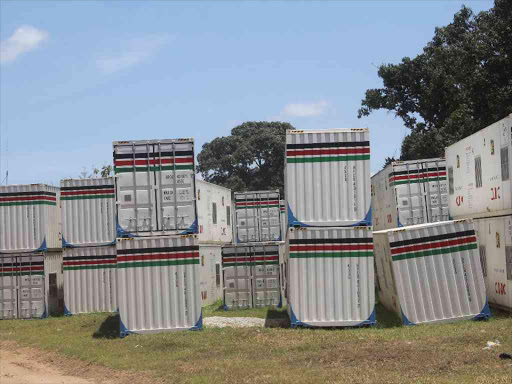 A file photo of some of the container clinics at the NYS Technical College in Miritini, Mombasa.

In a new report, Ouko has put on the spot the Ministry of Health for paying Sh800 million for the procurement of some 100 portable clinics before they were installed, commissioned and handed over.

The auditor has termed the move a flagrant violation of the the contractual agreement. The report vindicates the former head of internal audit in the Ministry of Health, Benard Mucher, who first raised the red flag on a possible scandal.

Muchere was later redeployed to headquarters in what was seen as a punitive move for blowing the whistle on the scam.

The lucrative tender for portable clinics was awarded to Estama Investment Limited at a cost of Sh1 billion.

However, the auditor says the contract has since elapsed yet it has not been executed. The portable clinics have been lying idle at the NYS yard in Mombasa since they were procured in 2015.

“Information available indicates that the containers were stored in government premises in Mombasa despite the fact that ownership has not passed to the government. Consequently, it has not been possible to determine whether the government obtained value for money for the expenditure of Sh800,000,000,” Ouko stated.

Also confirmed by the Auditor General is the diversion of funds against the law with the biggest casualty being free maternity - President Uhuru Kenyatta’s flagship project.

For instance, some Sh200 million that was meant for the free maternity programme by county governments was wired to Estama. Sh16,792,222 and Sh27,891,647 that were also meant for the maternity scheme was diverted for the upgrading of Nanyuki District Hospital and Rehabilitation of Embu Provincial General Hospital respectively.

Ouko says the the ministry cannot account for Sh1,010,739,793 because of unavailable payment vouchers and other related supporting records.

The Auditor General however says that a special audit of the Ministry of Health ordered by Parliament in 2016 is still underway.