As government roars, nobody knows extent of Kenya's forest cover 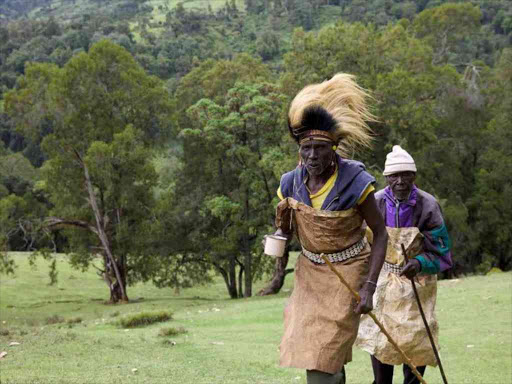 Men from the Sengwer community protest against their eviction from their ancestral lands in Embobut Forest, as part of the government's forest conservation efforts, April 19, 2016. /THOMSON REUTERS FOUNDATION/KATY MIGIRO

A key question as Kenya moves to protect its forests is the amount of land that is covered.

As the debate rages on,

it is unclear whether this stands at two, four or seven per cent but clear that the figure lies below the aspired 10 per cent.

Research shows that there is no institution, government or any other authority that can authoritatively give the exact figure of Kenya's forest cover.

Over the years, even government ministers have given varying indicators on whether the country is losing its forests or gaining cover.

that will review forest management across the country.

"The ongoing focus on my 2022 presidential bid can be turned into a crusade of attaining 10 per cent forest cover by 2022. It will greatly help reclaim our forest cover," he said.

In 2016, two reports on the status of forests as at 2015 showed how complex answering the question of coverage has become, not only for Kenya but other countries in the world.

an online platform that provides data and tools for monitoring forests, reported that “”.

The two organisations presented varying sets of data on the status of Kenya's forests though FAO's data continues to be the key source for many including the World Bank.

According to the FAO, while Kenya has lost a large portion of its forest cover over the years, it gained a substantive

It was a downward trend for Kenya between 1990, when forest cover

GFW, on the other hand, said that in

2.7 million hectares of tree cover - over

of the country's land area.

But it added that between

288,000 hectares of tree cover which it says was equal to

of the area's tree cover extent in

of all tree cover.

has the largest tree cover -

243,000 hectares compared to a national counties average of

Other top counties are

Narok also had the largest tree cover loss of 57,500 hectares compared to a country average of 6,120 hectares.

region-wide, equivalent to a

increase relative to the

agencies, including Kenya Forest Service, have also been giving different figures of the country's forest cover for a long time.

In 2013, then-Forestry and Wildlife Minister Noah Wekesa said an accurate figure of the forest cover is 6.6

per cent, not less than two per cent as had previously been

He said that this conclusion was reached following the use of

Kenya Water Towers Agency have led to the increase of forest cover from 2.2 per cent to 6.69 per cent since 2009.

In its 2014-2017 strategic plan, KFS said Kenya's forest cover, at the time of the publication of the document, stood at approximately 6.99 per cent.

Wakhungu said only 1.7 per cent of the land was covered by forest in 2013 but this has increased to seven per cent.

She attributed this to the rehabilitation of more than 400,000 hectares of degraded public land, which is part of the government's strategy to combat desertification.

In the plan, the service notes its goal is to "increase the national forest cover by 1.15 per cent (670,000 hectares) in the next five years.

Post a comment
WATCH: The latest videos from the Star
by OLIVER MATHENGE @OliverMathenge
News
06 March 2018 - 09:00
Read The E-Paper