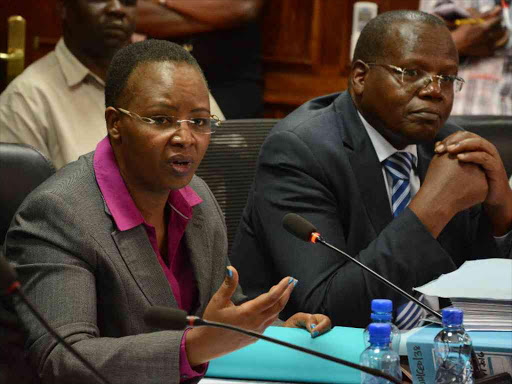 At least 700 registrars at Kenyatta National Hospital have gone on strike in a show of support for the one suspended over the infamous brain surgery mix-up.

The workers said on Monday that they want their colleague reinstated immediately and for the management to handle the hospital's systemic problems.

They held a meeting with

officials of the Kenya Medical Pharmacists and Dentists Union (KMPDU).

Samuel Oroko, who is KMPDU's national chair, said: "We demand a total overhaul of the entire KNH system."

Ouma Oluga, who is Secretary General, said: "We have deliberated on the suspension of the neurosurgeons. We call on the KNH board to reinstate them unconditionally. Over 700 registrars working at KNH will no longer offer services until issues are sorted out."

The Neurological Registrar was suspended alongside four other medics on March 2 after a head operation on the wrong patient.

As a result of the mix-up and amid concerns by the public, KNH Chief Executive Officer Lily Koros

and the Clinical Services director Bernard Githae were sent on compulsory leave to allow investigations.

Thomas Mutie was appointed on Sunday to fill Koros' position in acting capacity.

On Sunday, the facility denied reports that UoN student Angelo Miano died after the wrong surgery at the facility.

KNH said the two patients who underwent operations were being treated and have made "remarkable improvement".