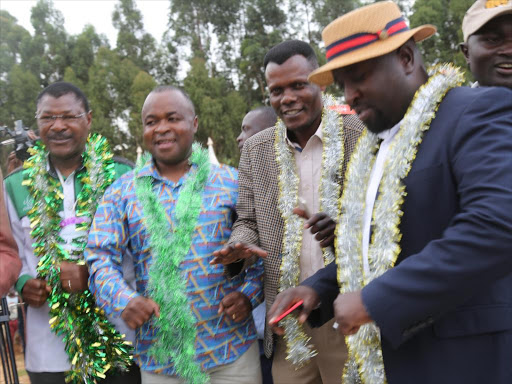 which he said is unfair.

He said Trans Nzoia is notorious in early campaigns.

He spoke on Saturday when the IEBC boss paid him a courtesy call in his office in Kitale.

On Thursday, Khaemba lashed out at Kiminini MP Chris Wamalwa who is campaigning to succeed him in 2022, a move that the governor is uncomfortable with.

Khaemba said Wamalwa is fond of tainting his name at funeral meetings.

Khaemba also suggested that the IEBC should hold County and national elections differently.

“The time given for hearing of presidential petition should also be extended from 14 to at least 30 days,” Khaemba said.

Chebukati said the commission will look into the recommendations and get the way of implementing them.

“It is true that what the people of Trans Nzoia have told my team through the governor is important and I agree that conducting six elections in one day is a challenge, “Chebukati said.

He said he will also sit with experts to put laws that will see the commission punish early campaigners.