Wanjigi to be charged with illegal possession of guns 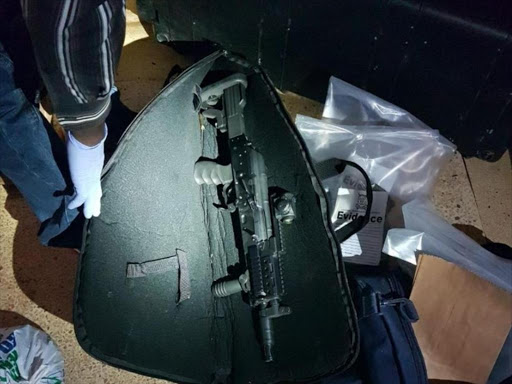 An M4 carbine rifle which was among guns recovered from businessman Jimmy Wanjigi's home in Muthaiga, October 17, 2017. /FILE

Businessman Jimmy Wanjigi will face 11 counts of criminal offences relating to guns next week on Monday.

Wanjigi, who was served with summons in a dramatic way in Nairobi, was expected to appear before a Nyeri court on Thursday.

But instead, he sent his lawyer Kiogora Mugambi who told the court that the summon paper was not genuine.

Mugambi told the court that the summons had no stamp or court seal but was unable to produce it in court.

But the prosecutor Winsely Nyamache told Nyeri Chief Magistrate Wendy Kagendo that the summons were genuine.

Nyamache told the court to ensure the accused person appears in court or it will guarantee a warrant of arrest.

"They will be no need to serve him afresh. The summons are genuine and worth issued, signed and stamped. He should appear here on Monday," the magistrate said.

He is facing the charges of being in possession of several prohibited firearms without certificate. Seven state witnesses have already been lined up to give their evidence.

Earlier, there was heavy police presence at Nyeri law court as Wanjigi's arraignment was to take place.

Both uniformed and plain-clothes police were seen at the court precincts as journalists awaited the businessman's arrival.

A spot check by the Star revealed that the officers carried guns as they surveyed the courts for any threat.

More on this: Tight security ahead of Wanjigi's appearance in Nyeri court

Wanjigi was to appear at 8 am, according

to a court order pinned on his vehicle windscreen on Wednesday.