Bleak future for Sudan, the last male northern white rhino on the planet 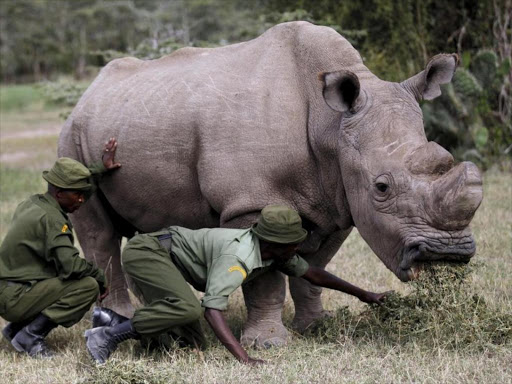 The rhino arrived at the conservancy in 2009.

"At the advanced age of 45, his health has begun deteriorating and his future is not looking bright," the conservancy said in a statement.

Sudan developed an uncomfortable age-related infection on his back right leg towards the end of 2017.

The infection was immediately assessed by a team of

from around the world.

He responded well to treatment and healed quickly.

Sudan resumed his normal movement and foraging habits from January up to mid-February, his demeanor and general activity improving significantly.

However, a secondary and much deeper infection was discovered beneath the initial one.

"The infection has been treated but is worryingly taking longer to recover. This is despite the best efforts of his team of

who are giving him 24-hour care," the conservancy said.

"Everything possible is being done to help him regain his health," Ol Pejeta said.

But it added: "We are very concerned about him. He's extremely old for a rhino and we do not want him to suffer unnecessarily.

We will keep you updated on all developments. Please keep him in your thoughts."

On December 5 last year, the conservancy announced that a diverse committee of veterinarians, conservationists and wildlife managers from the Czech Republic, Kenya, UK and South Africa had met over the animal's health.

They discussed the next steps of groundbreaking procedures seen as the last efforts to save the northern white rhino from extinction.

There are just three representatives of the sub-species left on the planet, one male and two females, all of which are ageing.

They are housed in a special facility at Ol Pejeta.

The animals were moved to Africa from Dvůr Králové Zoo in the Czech Republic in an attempt to get them to breed naturally under African conditions.

Achieving success in artificial reproduction techniques using surrogate southern white rhinos is now the only way to save some of the northern white genes in living animals.

This has never been attempted in rhinos.

Preparations for the historic procedure started with the retrieval and storage of eggs from southern white rhino females in European zoos.

They are to be fertilised under in-vitro conditions before eggs are retrieved from the last two remaining northern white rhino females in Kenya.

The plan is now to isolate the potential southern white rhino female surrogates from any males.

This is to ensure they are 'empty' and ready to receive northern white rhino embryos in 2018.

The procedure will involve the use of northern white rhino sperm from several (now deceased) males, that are stored in Berlin, Germany.

However, the only northern white rhino eggs in the world belongs to the two live females at Ol Pejeta - Najin and Fatu - who are 28 and 17 years old respectively.

The surgery required to harvest these eggs carries inherent risks and will have to be conducted in the field.

The fate of the northern white rhino subspecies depends on this operation.

Sudan became an internationally recognised ‘bachelor’ after popular dating app Tinder featured him to help raise money for this procedure.

Now 44, he is too old to mate, and spends his days under 24/7 armed guard and requires frequent veterinary care.

At his age, it is not expected that his health will dramatically improve.

Post a comment
WATCH: The latest videos from the Star
by GILBERT KOECH @KoechJunior_1 AND NOREEN KIBISU
News
01 March 2018 - 15:00
Read The E-Paper