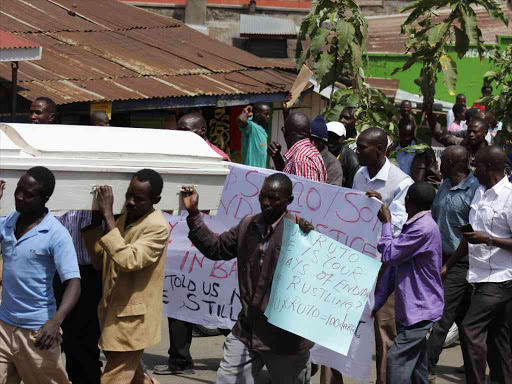 A file photo of residents of Bartabwa Ward in Baringo North Sub-County during a protest against bandit attacks. /JOSEPH KANGOGO

Erastus Kubui, from Laikipia County, was one of hundreds of traders who had been selling their wares at Amayan market when they were ambushed.

Sources said the attackers hurled stones and sticks at Kubui in the incident at about 2pm, killing him at the scene.

Police rescued 25 traders by letting them into their vehicles and locking others up in buildings.

"Officers rescued people who were on the verge of losing their lives,” said Baringo County Commissioner Henry Wafula.

Wafula said they had not established the reason for the clashes and announced that the market will remain closed as police hunt the criminals.

Many deaths and injuries have been reported as clashes rock the county.

The administrator, who did not want to be named, gave this report today on the fate of traders

"This may be why the attack on Amaya market took place," he said, adding a total of four Pokot residents were missing.

The meeting at Churo Amaya discussed matters including help for traumatised victims of the attack.

He and other leaders in the area had been accused of breeding conflict by way of cattle rustling.

The menace is also being experienced in

About a year ago,