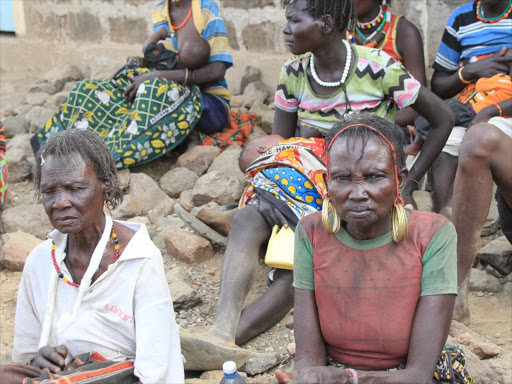 Over 3.4 million Kenyans face death from starvation as a result of an acute food shortage that has hit at least 14 counties.

At least six people have reportedly died in Baringo after weeks of starvation, amid denials by the local administration.

The biting hunger has been worsened by an acute water shortage due to drought, forcing some inhabitants to trek 15km in search of clean water. Leaders from both Baringo and Isiolo described the situation as “very bad”.

Local leaders in Baringo claimed at least 11 women have miscarried after taking contaminated water in the past few weeks.

In a clear signal that the situation is getting out of hand, the Kenya Red Cross is today set to launch a fresh food appeal, exposing the government's perennial inability to adequately address the recurrent crisis.

Kenya has continually failed to implement long-term strategies to arrest the recurrent food crisis, despite consistent warnings from several humanitarian organisations, including the United Nations and Red Cross.

Yesterday, Kenya Red Cross Secretary General Abbas Gullet said the food appeal would target all Kenyans and other well-wishers outside the country.

He however said the government must invest heavily in long-term solutions on food security, especially in arid areas, and emphasised irrigation.

According to Famine Early Warning Systems Network, an arm of USAID that tracks food security patterns worldwide, the food situation in Isiolo and parts of Tana River has reached crisis levels.

FEWSNET however says that in all the 14 counties, the situation would “likely be at least one phase worse without current or programmed humanitarian assistance”.

“Overall, stressed [looming shortage] outcomes persist across the majority of pastoral and marginal agricultural areas. However, crisis outcomes continue in parts of Isiolo and Tana River, due to poor food and income availability,” said FEWSNET, a leading provider of early warnings and analyses on acute food insecurity.

According to the organisation’s February report, the below-average forage and livestock body conditions across the majority of pastoral areas, with the exception of Turkana and Marsabit, has led to atypical and significant drops in livestock prices.

“Prices range between 7–24 percent below the five-year averages, limiting household purchasing power. Prices have also been depressed due to the oversupply of livestock for sale in the market, as January is the time that households seek to earn school fees,” it concluded.

Losutan further noted that on Sunday, the body of a five-year-old boy was found by the roadside, covered by stones, at Ng’inyang Junction.

“His parents from Naudo village, 30 kilometres away, notified us that he died of hunger and they were not ready to take the body back home for burial,” said Losutan, adding that police took away the boy’s body.

William Yano, a resident and a member of the Nyumba Kumi initiative in the Ng’inyang area, said more than 10 people have succumbed to hunger-related illnesses in Tiaty since January this year, “although they went unreported”.

“The two elderly people were earning the government cash transfer fund, so they were able to buy themselves food,” said Huka.

He, however, admitted that whereas the drought and hunger situation was real, it has not hit such alarming levels.

Isiolo Senator Fatuma Dullo painfully narrated how some families have been devastated by the ravaging drought.

“Some of the families that had over 1,000 cows today have none. I can tell you some of them are going crazy,” Dulo told the Star.

“There is a big problem. The only livelihood we have in Baringo, especially the lower regions, is livestock. Livestock for food, for clothing, for fees, everything. But currently, we are facing a serious crisis of drought and insecurity,” he said, pleading with the government to move in with speed.

“It’s time for the President to declare famine a national disaster. That way we can also get some support.”

Ironically, food security is part of President Kenyatta's Big Four agenda that he hopes to rollout as part of his legacy. During his inauguration on November 28, the President said Kenya has “learnt painful and expensive lessons” and that “never again should we allow the vagaries of the weather to hold us hostage”.

Agriculture Cabinet Secretary Mwangi Kiunjuri did not answer our calls or respond to text messages on the famine situation.

In most of the arid and semi-arid counties, residents are also battling water shortage due to prolonged drought, after rains failed since September last year. In Baringo, for instance, 11 women are reported to have miscarried after taking contaminated water from muddy pan dams.

“It forces us to trek over 15 kilometres to fetch water for domestic use and water our livestock along the rivers Ng’inyang or Chemoling’ot,” said Chemket Nyangatiang, a woman.

Yesterday, residents who spoke to the Star pleaded with the county and the national governments to rush in water bowsers to supply public facilities with clean water.

The La Niña phenomenon is caused by cold ocean temperatures — in this case over the equatorial Pacific Ocean — that lead to very dry conditions on land.

Environment PS Charles Sunkuli last week asked scientists to monitor the situation to enable the government to initiate strategies to fight its effects.