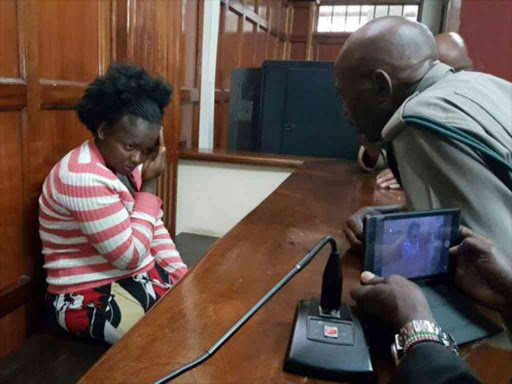 Edna Kerubo at Milimani Law Courts over the theft of a baby from Kenyatta National Hospital, February 21, 2018. /COURTESY

The woman accused of

stealing a three-week old twin baby bay at KNH has been remanded for five days.

Edna Kemunto will be held at

Kilimani Police Station following a police request for investigations to be completed.

“The nature of the offence [necessitates] more time for officers to complete investigations."

Kiptoo further said they were looking for witnesses, possibly patients who were at the facility on February 18 but have since been discharged.

He added that preliminary investigations revealed a child stealing

syndicate and that the probe will extend to Kisii and Bungoma counties.

Police will travel to Kisii where Kerubo was born and Bungoma where she was married.

The policeman also noted the baby and the suspect must undergo medical examinations that will require the extraction of DNA samples.

In addition, more suspects are likely to be arrested.

She pleaded for her release while covering herself, to present journalists from taking photographs of her face.

Milimani Senior Principal Magistrate Kennedy Cheruiyot noted her right to bail but said children must be protected, especially with reports of a syndicate.

The baby was stolen from Kenyatta National Hospital on Sunday night.

The suspect pretended to be a patient who agreed to help a father hold one his twins before disappearing minutes later.

Kemunto's neighbour in Kongo area, Kawangware, is said to have called police after seeing

arrive with the baby yet she lost her unborn child months ago.

The suspect was taken to Muthangari and later to Kilimani.

On Monday, police released CCTV footage of a woman believed to be Kerubo taking the baby from the facility.